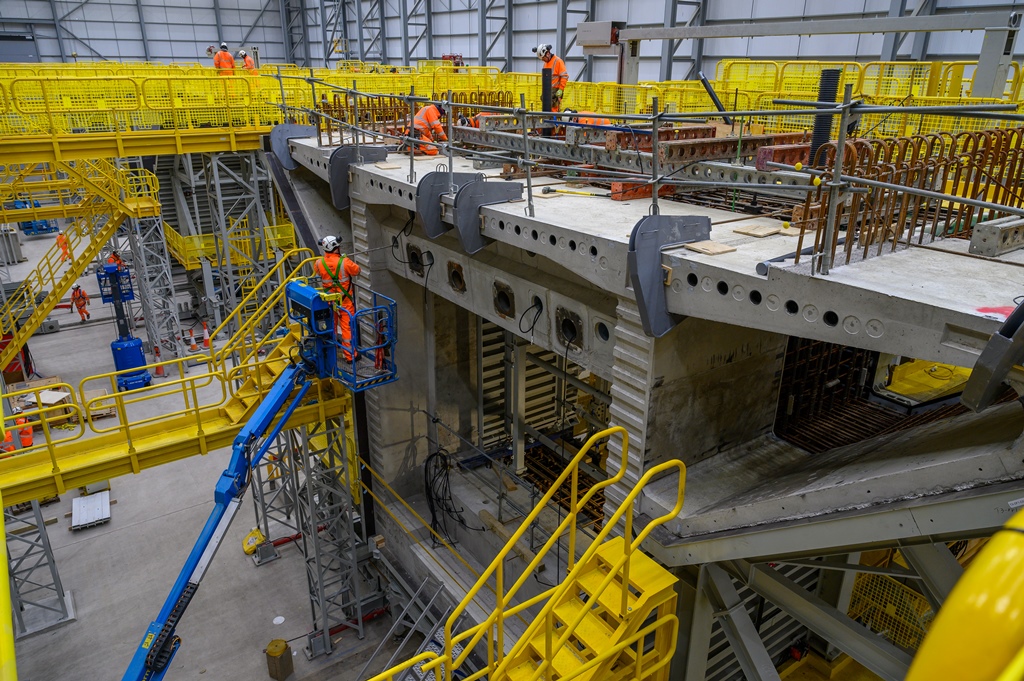 The Colne Valley Viaduct, which will stretch for 2.1 miles (3.4km) across a series of lakes and waterways just inside the M25 to the west of London, is being made from 1,000 concrete segments each weighing up to 140 tonnes.

They are formed in a purpose-built temporary factory, 100 metres long, within Align’s massive site compound near Maple Cross. Every segment is a slightly different shape.

At the peak of construction, around 12 segments will be cast every week using a ‘match-casting’ technique. This approach, where each segment is poured against the previous one, will ensure the whole arch fits when reassembled on site.

From the same compound, Align – a joint venture of Bouygues Travaux Publics, Sir Robert McAlpine and VolkerFitzpatrick – is also building twin-bore 16km tunnels under the Chilterns as part of its £1.6bn (Apr20 prices) HS2 contract.  Tunnel lining segments are being cast by Tarmac in a separate production hall on site – all 56,000 of them.

But while the tunnel lining segments and viaduct deck segments are precast, the 56 viaduct piers that support the deck are cast in situ by specialist contractor Kilnbridge. The first pier was cast in December 2021.

HS2 project client David Emms said: “We’re already making strong progress on the Colne Valley Viaduct – sinking the foundations, building the first piers, and now starting production at the new modular viaduct factory… It’s great to see how much progress has been made and I look forward to seeing work on assembling the deck structure later this year.”

Align project director Daniel Altier said: “Seeing the first deck segments being cast in the factory marks a significant milestone for the project. The design of the viaduct is such that each segment will be unique, delivering a structure which I have no doubt will be one of the most striking elements of HS2 once complete.

“I would like to thank all the Align team and our supply chain partners that have enabled us to get to where we are today and in particular VSL [post-tensioning specialist], Danny Sullivan [labour supplier], Sendin [supplier of uncertified rebar] and Tarmac [precast subcontractor].”