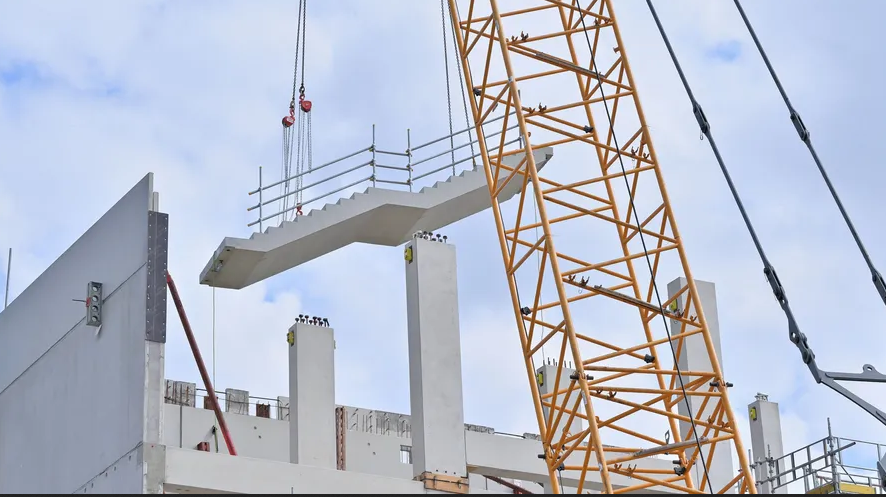 Barbour ABI’s data reveals that in April 2022 levels of contract awards and planning approvals were down 33% on March. But then it qualifies this with the rider that these things are always volatile and, besides, April included the Easter break so might be expected to see less business.

Tom Hall, chief economist at Barbour ABI, said: “After a stellar performance for contract awards in March, activity was always likely to fall in April due to the Easter holidays and a new financial year, coupled with the high inherent volatility of the index. The question on everyone’s lips will be is this the start of a fall in sentiment before a full-blown recession in the summer?”

The £1.5bn of infrastructure contracts awarded in April was 33% down on March.

Everton FC’s new £500m stadium gave a lift to contract awards in the hotel & leisure sector, which totalled £800m for the month.

Thanks to a buoyant market for warehouses, there was a 30% increase in contract awards in the industrial sector to £900m.

Healthcare remained static at a roughly average value of £190m of contract awards but this is 35% below 2021’s average of £280m per month.

Construction contracts signed for education buildings in totalled just £220m, in April, 50% the March total and less than half the average monthly contract award values recorded in the second half of 2021.

The total of £5.6bn infrastructure projects approved in April included £4.4bn for three offshore wind farms off the east coast of England.

Residential planning approvals were valued at £3.7bn in April – down 19% on March but still a high level of activity for the sector.

Commercial planning approvals fell 43% on March levels to £600m – well below average for the sector.

As for other sectors, recovery in the hotel & leisure sector is likely to remain sluggish with just £400m of planning approvals in April. The industrial sector slipped back to an average £700m following recent above average levels of planning approvals. Healthcare planning approvals were down more than 50% on the month to £150m, but this is about the historical average for the sector. After a slight improvement in the first quarter of the year, investment in education buildings continued at the subdued levels seen in 2021 at just £300m.

Tom Hall concluded: “One month does not make a trend, however the sharp falls in commercially sensitive sectors across contract awards and planning approvals, particularly for residential and offices will be cause for concern at the current time. On the flip side you could argue that in the face of high levels of uncertainty, the construction pipeline is continuing, at least currently.”