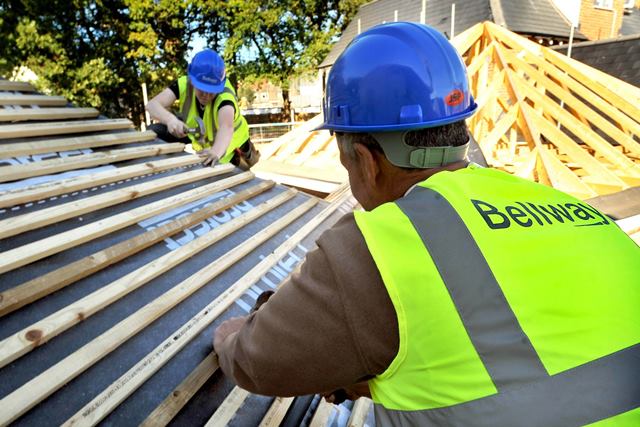 Bellway, for example, is facing a £490m bill for cladding and fire safety remediation.

Barratt Developments, Bellway, Vistry Group and Countryside Partnerships have added their names to the growing list of housing developers agreeing to the government terms for a new deal to fix dodgy cladding and fires safety issues.

The Department for Levelling Up, Housing & Communities (DLUHC) has asked 53 developers to pledge responsibility for fire-safety mitigation works. Signatories commit to undertaking or funding remediation and/or mitigation works to address critical fire-safety issues on all their buildings of 11 metres that they have built or refurbished in the last 30 years. They also commit not to claim any funds from the government’s building safety fund, set up to fix high-rise buildings over 18 metres.

The new commitments widen the liability that developers are forced to concede. Previously it was 18-metre height and 10 years; now it is 11 metres height and 30 years.

Barratt has remediated 19 buildings already and has a further 211 under review. It said: “Following a review of buildings above 11 metres developed by Barratt over the last 30 years in England, Scotland and Wales, the incremental cost of remediating buildings where Barratt is committing to take responsibility for doing so, or funding reimbursement of costs incurred, is expected to be £350m to £400m.”

It intends to recover some of the money from other culpable parties involved in the developments but has no way of knowing how much this might be. “This recovery is uncertain and therefore has not been included in our expected incremental costs,” it said.

Bellway has completed remediation work on four developments so far, is under way on 13 developments and is in design stages on a further three developments.

It has already aside £186.8m for cladding remediation since 2017. The expanded liability of the pledge takes the total cost towards £500m.

Bellway said: “The board has considered the information currently available to it and has determined that the best estimate of the cost of the pledge will be around £300m in addition to the £186.8m already set aside since 2017.

Vistry puts its remediation costs in the range of £35m to £50m, in addition to the existing fire safety provision of £25.2m.

Countryside had previously set aside £41m  for remedial works to enable an EWS1 certificate to be issued on 69 buildings constructed between 2008 and 2017. It reckons that it has developed around 290 buildings of 11 metres or more over the last 30 years, including the 69 buildings developed between 2008 and 2017. Although many of these buildings will not require remediation, it said, it is still trying to work out the likely costs that it is facing.

Barratt chief executive David Thomas, said: “We have always been clear that we do not believe leaseholders should pay for remediation of their homes and are committed to helping affected leaseholders living in the buildings we developed. Through constructive engagement between industry and government, a proportionate and sensible approach has been found and we look forward to completing the remediation process as quickly as possible.

“As well as committing to remediating buildings we were responsible for developing, we will be paying around £400m over the next 10 years through the residential property developer tax to help fund remediation of buildings built or refurbished by other organisations. As government continues to work through policy developments in this area, it is vital that it considers the burden of this taxation on UK housebuilders and how it might impact the ongoing construction of homes that the UK needs.”