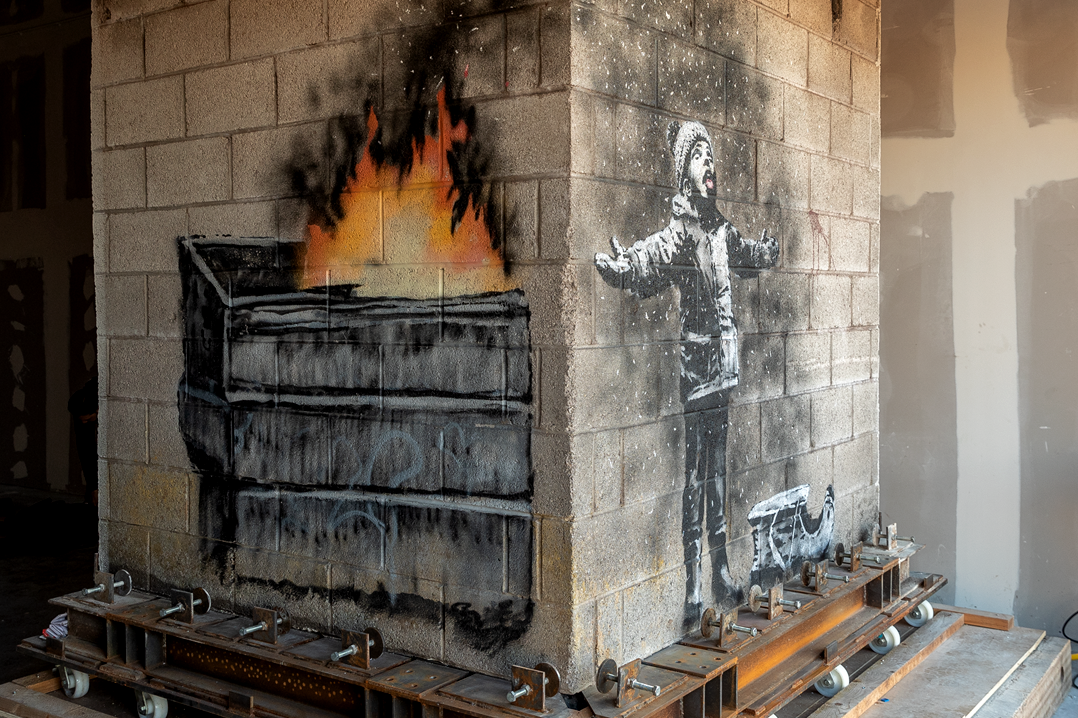 Seasons’ Greetings, presumed to be by the celebrated anonymous graffiti artist known as Banksy, depicts a boy catching what initially seems to be snowflakes in his mouth but is revealed to be black dust pollution from a nearby steelworks.

It appeared on the outside of a steelworker’s private garage in Port Talbot on 19th December 2018. The garage’s owner sold the artwork to local dealer John Brandler, who removed the walls to an empty shop unit in the town.

However, he now wants to find somewhere safer for it. Until then, it is being stored away in a secret location, outside of Wales.

“Since Season’s Greetings appeared three years ago, fanatics have tried to destroy this amazing piece of art. We’re moving it to preserve it for future generations, where it can be seen and enjoyed, but not vandalised,” John Brandler said.

Egg Group has been tasked with the challenge of relocating it to a temporary secured undisclosed storage unit, where it will remain until it can be “freed by the Banksy Preservation Society”, which plans to raise money to safeguard its future in a gallery or museum.

The street art painted on to concrete blocks weighs nearly half a tonne. Egg will encase Season’s Greetings intact within a specially designed eggshell comprising an inner membrane, outer membrane and a protective shell. The temporary bespoke engineered steel frame has been designed to enable the wall section to be safely mobilised horizontally and vertically in one piece with the aid of specialist plant and machinery. Once the shopfront of the retail unit has been removed the Egg team will float the art piece out on a skate, lift it on to a lorry, then restrain it before transporting it to a new location.

Egg Group executive chairman John Frankiewicz, a former divisional chief executive of Willmott Dixon, described rising to the challenge of moving the artwork safely: “As a design and build company with a fresh approach, Egg Group identifies with Banksy’s mischief and the disruptive impact of his artwork; making the art sector more engaging and better as a result. The writing was on the wall for this important piece of art, so we stepped in with a creative solution and designed a protective eggshell enabling Banksy’s Season’s Greetings to be returned to the public safely.”