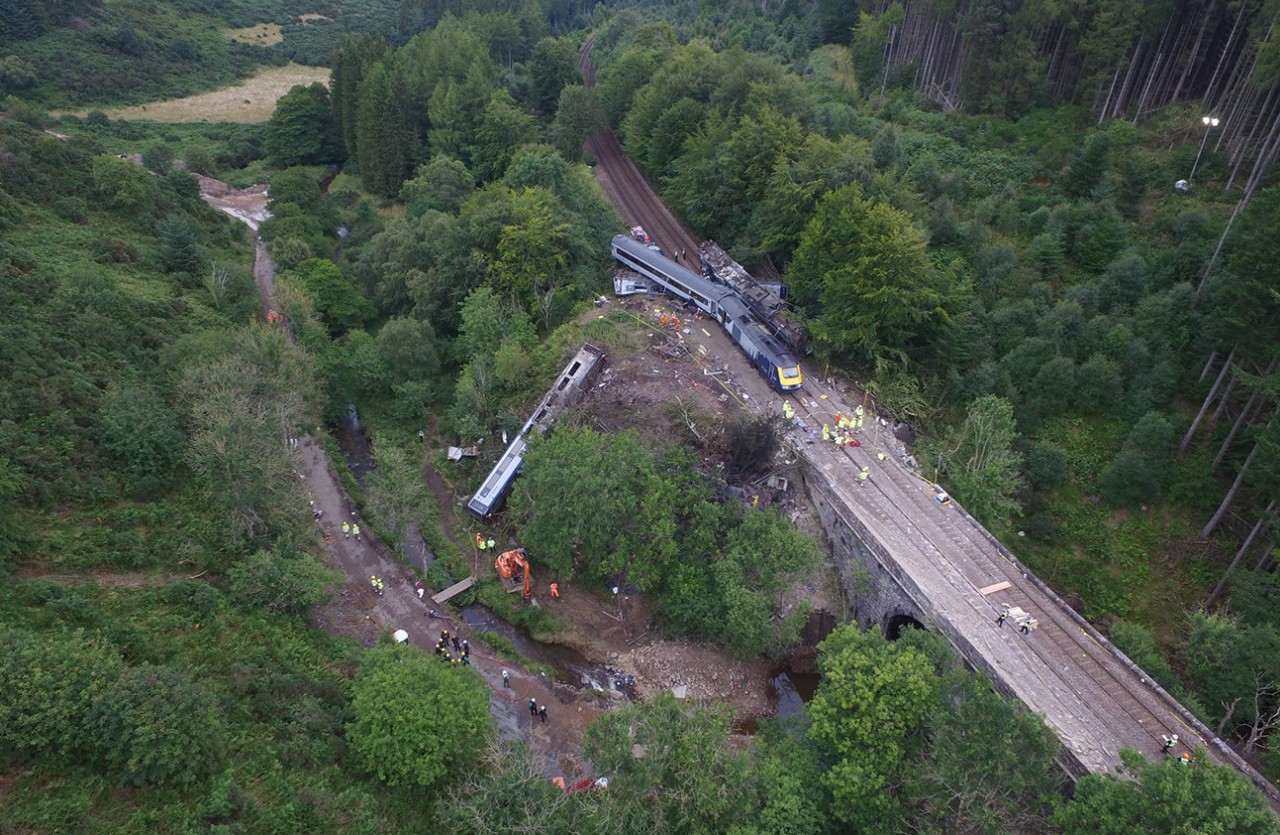 “The company that was contracted to construct the drain, Carillion, did not undertake construction in accordance with the designer’s requirements,” says the report by the Rail Accident Investigation Branch. “Consequently, the drainage system was unable to perform as the designer had intended when it was exposed to particularly heavy rainfall.”

At around 09:37 hrs on Wednesday 12th August 2020, a passenger train derailed near Carmont, Aberdeenshire. The train was travelling at 73mph, just under the normal speed for the line concerned. After derailing, the train deviated to the left, before striking a bridge parapet which caused the vehicles to scatter. Three people died as a result of the accident and the remaining six people on the train were injured.

On the morning of the accident there was near-continuous heavy rain at the site of the accident between about 06:00 hrs and 09:00 hrs. The 51.5mm of rain that fell in this period at the accident site was close to the average rainfall for the month of August in this part of Scotland. Train 1T08 derailed because it struck debris that had been washed out of a drainage trench. This trench, which had been constructed between 2011 and 2012, contained a perforated pipe that had been installed as part of a project to address a known problem with drainage and the stability of a cutting in that area. However, the drainage system and associated earthworks had not been constructed in accordance with the original design and so were not able to safely accommodate the water flows that morning.

RAIB’s investigators found that a low earth bank (bund) had been constructed that ran across a slope leading towards the track. The presence of this bund significantly altered the flow of water such that extreme rainfall would cause a concentrated flow into the steeply sloping section of trench. The evidence indicates that the intensity and duration of this rainfall would have generated water flows into the trench that were sufficient to wash away the gravel fill and the ground immediately surrounding the trench.

“The most significant diﬀerence between the original design of the drainage system and the final installation was the construction of a bund running across the slope towards the railway and perpendicular to the 2011/12 drain,” says the report. “This bund, which was constructed outside Network Rail’s land, had the eﬀect of diverting a large amount of water into a gully so that it all reached the drain at the same location, thereby increasing the propensity for washout of the gravel infill. RAIB found no evidence that the construction of the bund was notified to Network Rail or the designer.”

No instruction was given by route control or the signaller that train 1T08 should be run at a lower speed on its journey between Carmont and Stonehaven. At that time there was no written process that required any such precaution in these circumstances. Consequently, normal railway rules were applied to the train movement. The RAIB’s investigation found that the ‘route controllers’ (who were responsible for the operational management of Scotland’s railway network) had not been given the information, procedures or training that they needed to effectively manage complex situations of the type encountered on the morning of 12 August 2020.

As a consequence of this accident, RAIB has made 20 recommendations for the improvement of railway safety, including better management of civil engineering construction activities by Network Rail and its contractors.

Simon French, chief inspector of rail accidents, said: “This was a tragedy that devastated the lives of the three families who lost their loved ones and brought terror and injury to six other people on the morning of 12 August 2020. Our thoughts are with them all. Nothing can undo this event, but we owe it to everybody who was affected by it to strive to learn safety lessons for the future.

“Although railway safety in the UK has been steadily improving over recent decades, the tragedy at Carmont is a reminder of just how disruptive and potentially dangerous Britain’s volatile weather can be. The railway industry needs to get even smarter about the way it counters this threat, and to better exploit remarkable modern technology that enables the prediction and tracking of extreme weather events such as summer convective storms. There’s also an urgent need for the railway to provide real-time decision-makers with the information, procedures and training they need to manage complex and widespread weather-related events across the rail network.

“No one wants to shut down the railway every time it rains. Railways need to operate safely and reliably in most weather conditions. If they’re not able to achieve this, potential passengers will be forced onto the roads, which are undoubtedly much more dangerous in bad weather conditions. So, there’s a balance to be struck and technology can help to get this balance right. Modern weather forecasting and monitoring systems can spot the truly exceptional events before they occur and as they happen, so allowing railway operators to implement precautionary measures when it’s prudent to do so. This would benefit the safety of the line (by restricting train speeds, or suspending operations, when necessary) while reducing the need for imposing blanket speed restrictions over areas that are not at significant risk.

“This investigation highlights the risk of uncontrolled changes to railway infrastructure during construction. It is so sad that a project that was designed for the protection of the travelling public became unsuitable for its intended use and posed a hazard to trains because of such uncontrolled changes to the design. When anything is built in difficult conditions, such as on the side of a steeply sloped cutting, changes will often be needed for practical reasons. Although such changes are normal and can be highly beneficial in terms of saved time and cost, they need to be made with care. In each case, the original designer needs to understand the change that’s proposed and review the implications of a change that may appear inconsequential to the team on site. I hope this example will resonate throughout the UK’s construction industry.

“It’s important for all of us in the rail industry not to dismiss this truly harrowing accident as a one-off event. The railway industry needs to think through the implications of severe weather on its infrastructure, whilst also looking to the behaviour of trains should they derail after striking obstructions such as washouts and landslips. Is there more that could be done to keep trains in line and closer to the track, to minimise the risk of jack-knifing and to keep bogies attached to rail vehicles? RAIB doesn’t have all of the answers but is urging the railway industry to think about ways of guiding derailed trains, and to think about the longer-term implications of continuing to operate rolling stock that pre-dates modern standards.”