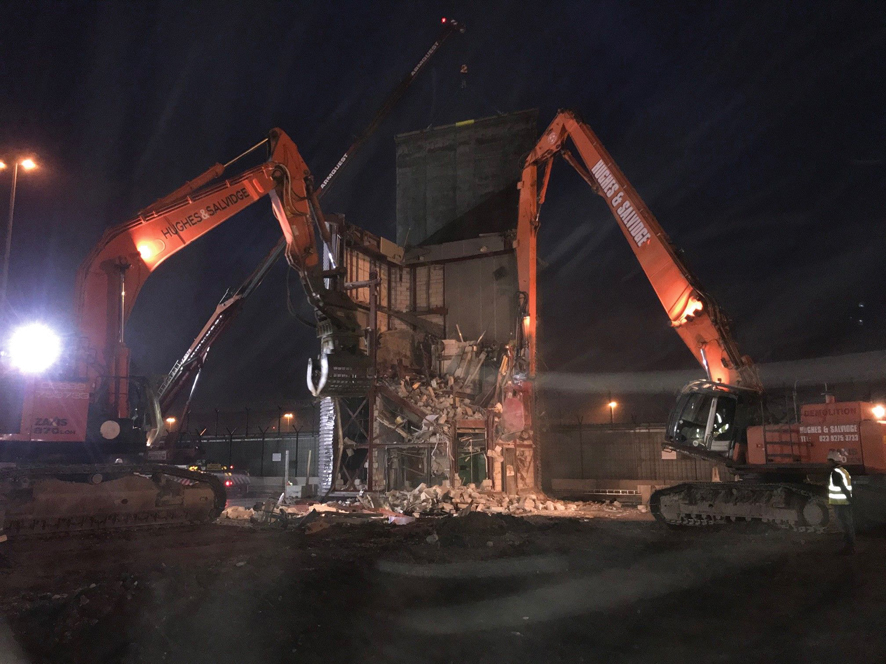 In many sectors of the construction industry, one way to ensure a steady workflow is to broaden your scope and be ready to take on any type of job a client might require.

But another is to establish yourself as the pre-eminent supplier in a specialised field. That way, clients in your chosen sector will beat a path to your door.

Portsmouth-based contractor Hughes and Salvidge can certainly turn its hand to most demolition jobs, but its reputation is especially strong in one unlikely-sounding area: airports.

Over the years the company has worked on all the major airports in England and claims to be the only demolition contractor with a permanent on-site presence at Heathrow.

“It started about 23 or 24 years ago – before my time,” explains Danny Byng, the company’s business development director. “We got a contract from an existing customer who had work at Heathrow. We did really well on that job and were then offered more work on the site. Basically, we never left – we’ve been there ever since.”

To the casual observer there wouldn’t seem to be enough demolition work to justify a continuous presence at an airport – even a huge airport like Heathrow. “You’d be surprised,” says Byng. “There’s always something going on; I’ve already knocked down buildings that I saw being built.”

Even when there’s been no actual demolition work underway, Hughes and Salvidge has kept itself busy with a variety of small tasks, such as strip-outs and other small concessions. “We tackle everything from the smallest jobs up to the largest demolition projects,” says Byng.

With a big client located on a site large enough to furnish a constant stream of work, specialising in airport demolition might appear to be a cushy number, but Byng says it’s not for everybody.

The airport environment imposes onerous demands on all contractors, with both health & safety and security uppermost among priorities. Airside passes are of course mandatory for all staff working in areas behind security, passport and customs barriers. Strict adherence to airport protocol is a main requirement of working both airside and landside.

“Security is massive,” says Byng. “We employ our own full-time pass officer to organise clearance and deal with all the booking in and out of site.”

Needless to say, not only Hughes and Salvidge but also its supply chain partners must be vetted and cleared to work in the airport. This means that the company has very close relationships with key suppliers – notably Wiltshire-based structural engineer Michael Loveland, but also key subcontractors such as scaffolding, M&E and specialist plant suppliers.

“We do tend to work with the same people all the time,” says Byng. “Bringing someone onto the team who has no previous experience of working in airports makes things more complicated and isn’t always a good idea.”

One good reason for maintaining a constant presence at Heathrow is that a contractor’s safety and security clearance will lapse once an airport contract is finished and the contractors have vacated the site.

Construction firms that expect to bid for airport work on an ad hoc basis will find they have to reapply for clearance each time.

Among its most notable projects at Heathrow was the partial demolition of the old Europier structure during phase 2 of the Terminal 2 redevelopment by Balfour Beatty in 2012. This required the central element of the structure to be left in situ and operations to take place while the wing sections of the building were removed.

Another key Heathrow project was the demolition of the old control tower, also in 2012. This nine-storey building was removed to make ways for new roads as part of the new terminal development.

This was an especially challenging task, as the building was located adjacent to the airport’s central bus station – the UK’s busiest, according to Hughes and Salvidge – and with a high-temperature hot water main running in ducts beneath the entire structure.

Much of this work was carried out at night in order to minimise disruption to airport operations and to ensure the 30-month contract programme was met.

A third phase involved removing a couple of four-storey steel-framed buildings. Hughes and Salvidge again used demolition excavator to drop the roof onto the floor below, bay by bay, folding the walls in and scraping the material onto the lower levels. The basements were backfilled with arisings from the demolition.

Since the completion of this contract, however, Hughes and Salvidge has had to scale back its airport activities – which Byng says dried up completely with the outbreak of the Covid-19 pandemic.

“We’ve been working at Heathrow continuously for over 20 years and until the pandemic we had a large office, a meeting room and stores on site. But when Covid struck, everything just hit a brick wall. We went from 100 mph to zero overnight; we were asked to submit our final account and were paid up to date,” says Byng.

Although all work stopped, Hughes and Salvidge has maintained a presence on site, although its facilities are now confined just to one small room. The company has not carried out any work on site since March 2020 but Byng is hopeful of winning new work at Heathrow later this year.

“Heathrow’s currently finalising a new framework and we’re anticipating a large volume of work towards the back end of the summer,” he says.

Hughes and Salvidge was founded in Portsmouth in 1964. Today, the company also has a northern office located in Huddersfield while its airports division (which also acts at the London office) is located at Heathrow Airport.

The company currently has a workforce of over 100 directly-employed site operatives and a plant fleet of over 50 machines.

Hughes and Salvidge is part of a group of companies that includes K&B Crushers, Aasvogel Waste Management, H&S Metals, H&S Asbestos and Valley Trading – all active in the demolition, waste management and recycling industry.