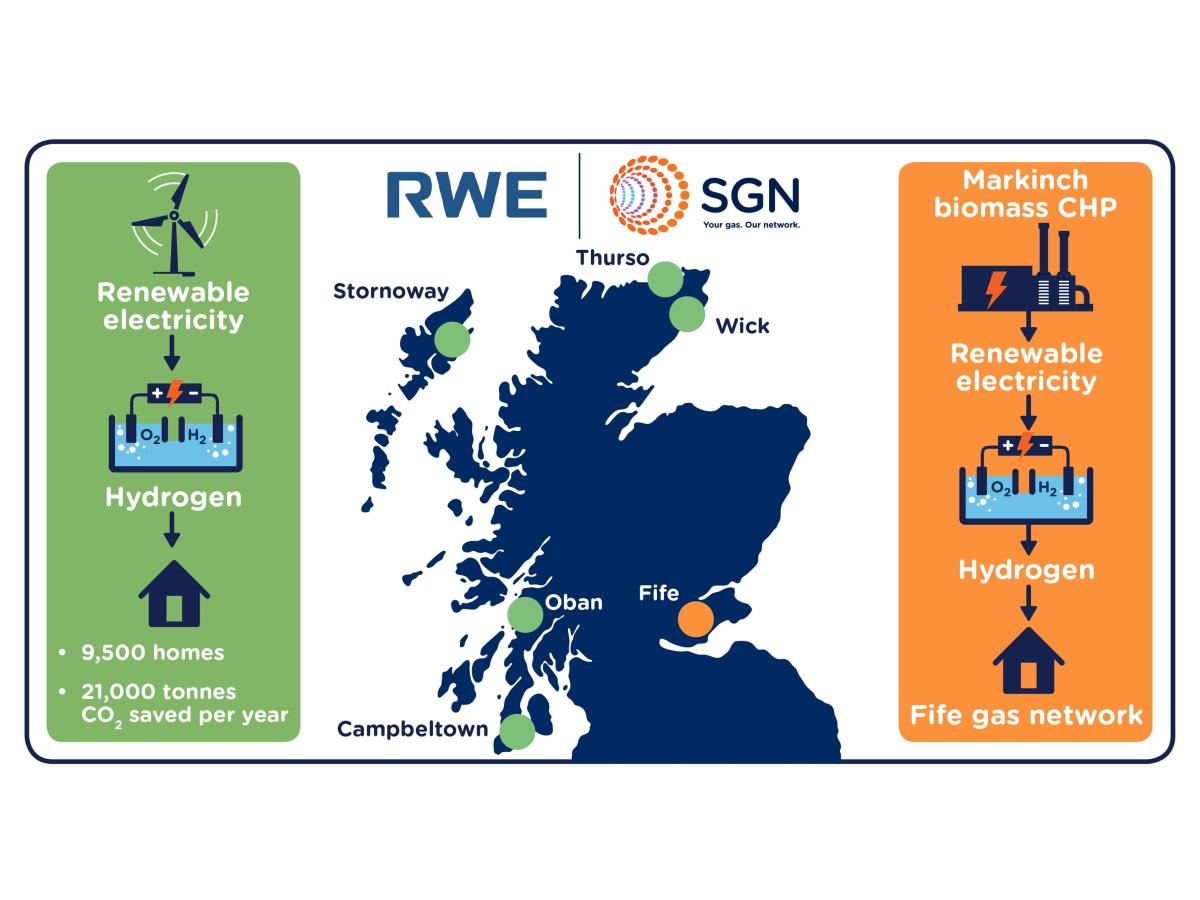 A memorandum of understanding (MoU) has been signed between the two companies to explore the development of electrolysers, powered by onshore wind farms, to supply homes and businesses with hydrogen via Scotland’s gas network. RWE’s 10 onshore wind farms in Scotland have a combined capacity of 213MW.

SGN and RWE said that hydrogen has a crucial role to play in achieving net zero and is an essential component to decarbonise sectors like industry, heavy load transport, aviation and heat. The UK government’s Energy Security Strategy, published in April, doubled its ambition for low-carbon hydrogen production capacity to 10GW by 2030. Similarly, the Scottish government’s Hydrogen Action Plan aims to create 5GW of hydrogen by 2030 and 25GW by 2045.

The partnership will investigate the decarbonisation of homes and businesses connected to the networks of Campbeltown, Stornoway, Oban, Thurso and Wick, which are not connected to the mains gas network. These networks are currently supplied by liquified natural gas (LNG) and liquified petroleum gas (LPG), which when swapped with hydrogen could save 21,000 tonnes of carbon each year and decarbonise around 9,500 properties.

The partnership will define how much hydrogen is needed, the requirements to convert these networks to hydrogen, and the supply of green electrolytic hydrogen from RWE’s renewable onshore wind farms nearby.

RWE and SGN said that, in doing so, the project could also unlock onshore wind farm developments in ‘grid-constrained’ areas, by providing a use for the green electricity generated. Grid constraint means that there is too much energy being generated for the electricity grid to manage.

A feasibility study will also be conducted over the coming months into a 100MW electrolyser at RWE’s Markinch CHP biomass plant. This could produce green hydrogen from local and grid-connected renewable energy to connect into SGN’s gas network in Fife. It would build on the work SGN is already undertaking in Levenmouth on H100 Fife project.

Steve Boughton, RWE director hydrogen development, said: “This MoU is a perfect partnership to develop options for the decarbonisation of domestic and business gas networks, and to help Government achieve its ambitions for 10GW of hydrogen production. Hydrogen will play an essential role in the pathway to net zero, particularly in industry and homes which are hard to decarbonise, and RWE is perfectly positioned to support the development of the UK hydrogen economy.”

Fergus Tickell, SGN system transformation and business development lead, said: “We’re delighted to partner with RWE which shares our belief that hydrogen gas has a leading role in the decarbonisation of homes, businesses and industry in Scotland and the rest of the UK.

“We’ll explore how hydrogen produced locally can be delivered through the world-class networks we’ve been operating for decades, to all of Scotland’s communities, including in Fife, Campbeltown, Stornoway, Oban, Thurso and Wick. We also look forward to investigating more opportunities across the UK.”