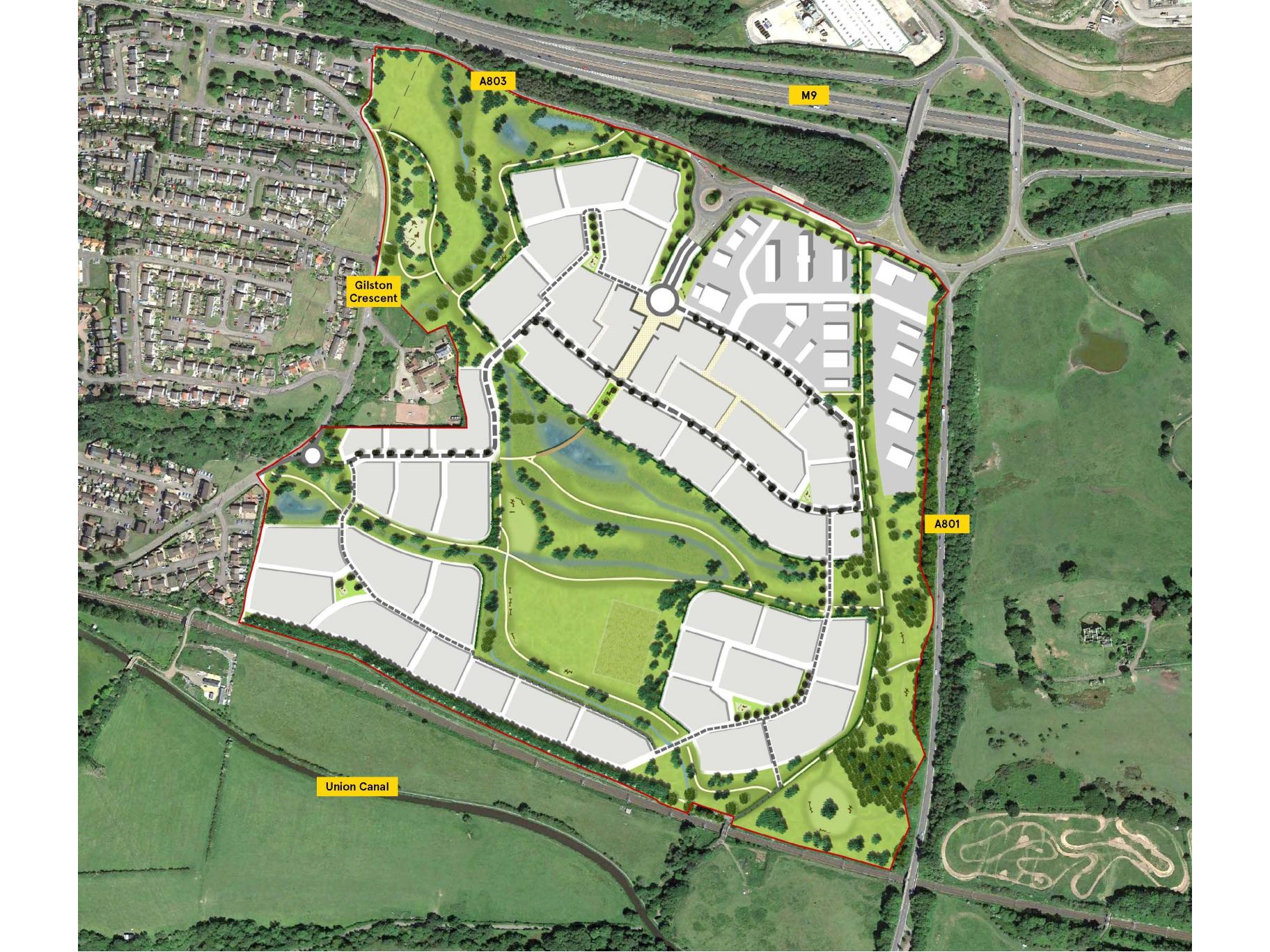 The application for planning permission in principle by Hansteen Land is for 55.6ha of land located at Gilston Park, Polmont.  The development is due to be considered by councillors on the planning committee on Wednesday 16th February.

The masterplan makes provision for additional contributions approaching £8m that would go towards local education, affordable housing, transport infrastructure – including upgrades to junction 4 of the M9 and local junction improvements. It also proposes new and improved bus services and a site for new healthcare facilities if this is sought by NHS Forth Valley.

This area has already been allocated as the mixed-use Gilston Strategic Growth Area / Eastern Gateway Strategic Business Location within Falkirk Council’s adopted Local Development Plan. The scheme has also received the backing of Forth Valley Chamber of Commerce.

The proposed new mixed-use neighbourhood will provide employment and commercial land, around 500 homes (including 25% affordable housing), areas of parkland and a new neighbourhood centre with potential for retail and community use.

Previous planning proposals for the site were unable to attract large scale business users and so Hansteen is now seeking approval for a revised mix of uses. This includes about 2.5ha of land for new or local businesses, start-up business enterprises and workshops.

Hansteen said that around 80 direct construction jobs and 70 indirect jobs will also be created for every year of construction and, once established, Gilston Park is expected to support about 300 full-time jobs.

New areas of connected parks would be established, with Gilston Burn forming a key focus of the new neighbourhood. A central sustainable urban drainage (SUDS) pond and associated ecological habitat areas will be provided, with a boardwalk forming part of a new path network.

A representative from Hansteen Land said: “The Gilston Park development will bring considerable economic benefits to the local community, delivering a jobs boost and millions of pounds worth of investment.

“Our proposals will greatly assist in the regeneration of the area and if approved we look forward to continue to work with the council and the local community on their delivery.”

Lynn Blaikie, president of Forth Valley Chamber of Commerce, said: “It is fantastic to see this level of investment being made in the area, delivering land for employment and commercial uses, as well as much-needed housing. As we recover from the impacts of Covid-19, the delivery of hundreds of jobs and considerable investment is to be applauded, increasing education provision and delivering key transport infrastructure improvements and new bus services.”