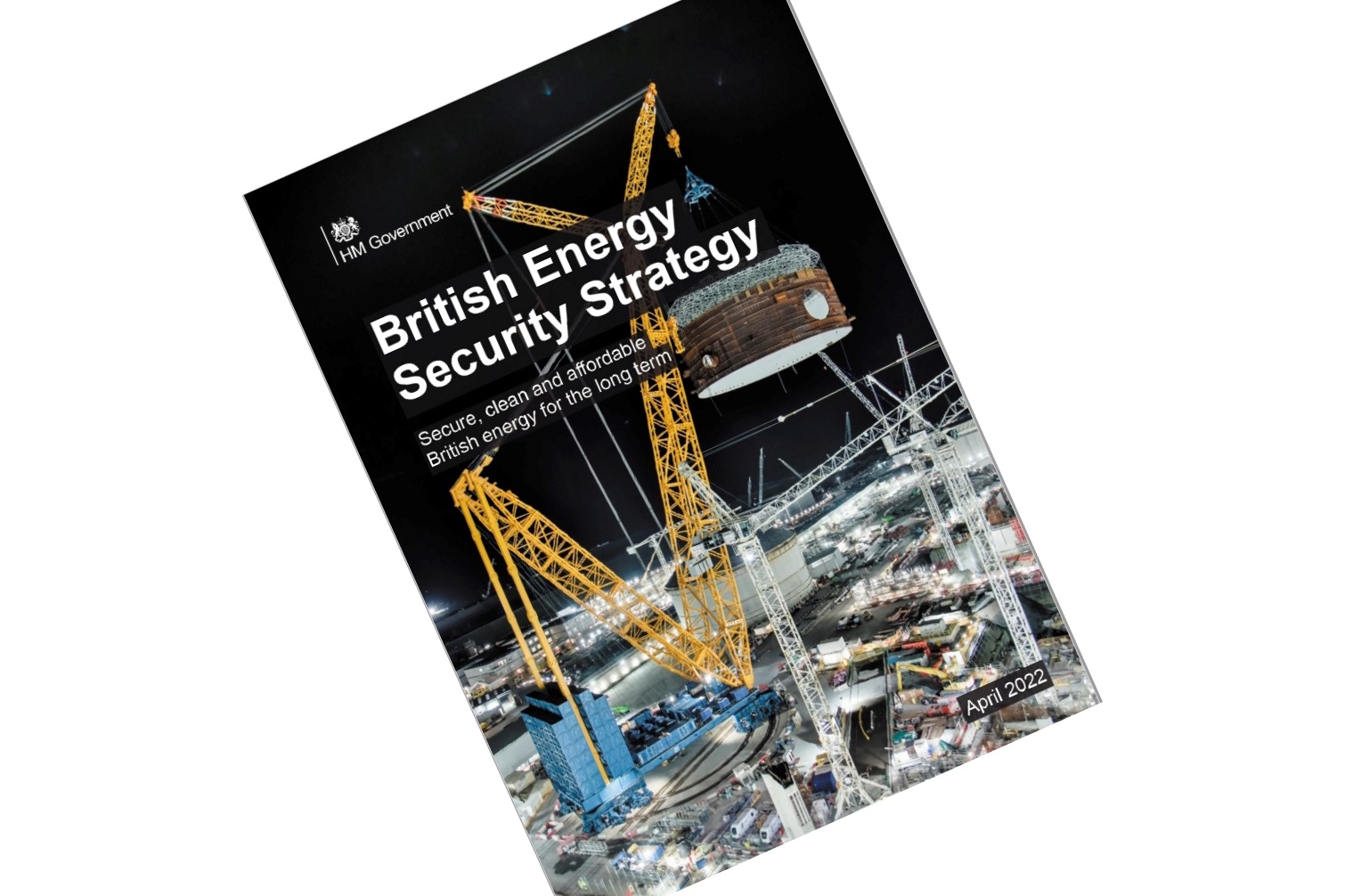 The British energy security strategy, published yesterday, is to swing away from fossil fuels towards more nuclear and offshore wind – but there is not much in the works to improve the energy efficiency of the nation’s built environment.

Currently nuclear power stations are closing down faster than they are being built. There are only weight left and only one is under construction, Hinkley Point C in Somerset, by a joint venture of French and Chinese government interests. The UK government is relaxed about French state-owned EDF running nuclear power stations here but has gone cold on Communist China having control.

Plans for new nuclear power stations have made some progress in Anglesey (Wylfa), Suffolk (Sizewell) and Essex (Bradwell) but have also had set backs with Japanese and US investors walking away. The UK government has now accepted, in its energy strategy, that more state intervention in the market is required.

The plan now is to treble  nuclear capacity to 24GW by 2050, to deliver 25% of projected electricity demand. To get there, the government intends to take one project to final investment decision (FID) stage this parliament and two projects to FID in the next parliament. Some might be Rolls Royce’s new-style Small Modular Reactor.

UK taxpayers already spend £400m a year supporting new nuclear power development, including £100m to support the development of Sizewell C, and £210m to bring through small modular reactors. These remain in the strategy document.

A next round of auctions of offshore wind rights will be held in March 2023, a year earlier than previously planned.

There is currently 14GW of solar capacity in the UK split and the cost has fallen by around 85% over the past decade. The government expects a five-fold increase in deployment by 2035 and will relax planning rules to make it easier to install, both on rooftops and across the countryside

Tidal energy was given a passing mention in the document. “As an island nation surrounded by water, we will also aggressively explore [sic] renewable opportunities afforded by our geography and geology, including tidal and geothermal.”

On energy efficiency, there is no new money to support a new home improvement scheme for private homeowners – 70% of people own their own home, with most built before 1973 when insulation standards were raised. There is zero VAT for the next five years on the installation of energy saving materials and a £450m boiler upgrade scheme to encourage people to install costly heat pumps.

The construction industry has been lobbying for a national retrofit strategy to improve the nation’s housing stock. The government has decided for a consumer-led approach, rather than the statist top-down imposition on home-owners that the industry is advocating.

To quote the strategy document: “There are many measures for reducing energy bills including cavity wall insulation, which typically costs between £1,000 and £3,000. Measures that improve the efficiency of our homes, on average, reduce bills by £300.

“On aesthetics, upgrades can retain and enhance building’s character with measures being easy to install and beautiful in design.

“On choice, this is not being imposed on people and is a gradual transition following the grain of behaviour. The British people are no-nonsense pragmatists who can make decisions based on the information.”

For full details, British energy security strategy can be found at www.gov.uk/government/publications/british-energy-security-strategy

“Today’s energy security strategy was a supply-side strategy whereas we are facing an urgent demand-side problem. Whilst we welcome measures to bolster the long-term security of the UK’s energy supply, the plans outlined today do not represent a whole-hearted commitment to transitioning as quickly as possible to renewable energy and will do little to address two of the biggest challenges we currently face: tackling rising energy costs and improving the energy efficiency of our homes and buildings.”

“The UK has one of the oldest and least energy efficient building stocks in Europe, which unnecessarily inflates demand for natural gas. Accelerating the roll out of retrofit measures like insulation is a short-term solution that could address spiralling bills and significantly improve the energy efficiency of our housing stock, but it is disappointing to see that this has not been covered within today’s Strategy.”

“The need to accelerate the roll out and investment into insulation extends beyond housing. With nearly a fifth of all gas being consumed by the non-domestic sector, a lack of any retrofit strategy will result in higher costs for our businesses and public infrastructure – including schools and hospitals. This will ultimately be felt by households, who will have to bear the brunt of higher prices.”

“Aside from keeping consumers’ energy bills down and reducing their carbon footprint, retrofitting homes is a fast and cost-effective strategy to reduce demand for natural gas and will help to support the UK’s energy security. Recent announcements such as the abolition of VAT on some energy saving materials are a welcome start. However, without a clear plan and funding to upgrade the UK’s building stock, our energy security strategy cannot be driven forward effectively – and we will quickly lose momentum on the drive to net zero.”

“We are pleased to see the government’s plans to increase solar capacity across the UK, with expectations that deployment will increase fivefold by 2035. We encourage the government to capitalise on the many acres of industrial flat roof space across the country for the situation of panels, rather than using solar ‘farms’ on land that would otherwise be useful for agricultural or other purposes.

“The elephant in the room is that the strategy lacks new provision to improve energy efficiency. Reducing demand is a quick win: the first step to meet the UK’s needs should be improving the energy efficiency of our buildings through properly insulating roofs and walls. Fitting a roof with solar panels is an excellent way to provide a source of power for business premises and homes, but if the building is heated yet poorly insulated, a proportion will be lost straight away. Investing in generating more power holds less weight if a substantial proportion of it will be immediately – avoidably – wasted. Let’s focus on energy efficiency in conjunction with efforts to generate green energy, so that what we generate doesn’t go to waste.’

“Be it wind, solar, hydrogen or nuclear energy, our members are critical to the successful delivery of complex infrastructure projects. They stand ready to work in close partnership with government in the creation and design of a more secure, and less carbon intensive, domestic energy system.

“We welcome the investment in up to eight new nuclear plants alongside increased investments in offshore wind, solar and hydrogen – crucial if we are to enhance energy security and meet net zero targets in an affordable way for consumers. However, to help us on our net zero journey, we would have liked to have seen more to encourage the delivery of the cheapest forms of renewable energy, onshore wind and solar, as well as more on driving greater energy efficiency.

“We must not forget that it will take time for any new strategy to deliver results – for energy security, our net zero targets, or on affordability. Nevertheless, the Strategy outlines a positive and proactive intent.”

“Britain is right to take control of its energy future, with a step change in ambition for electricity from wind, nuclear and solar, and greater energy efficiency.

“Building more new nuclear will reduce Britain’s dependence on overseas gas and keep energy prices stable, creating thousands of jobs while we’re doing it.  At Hinkley Point C we’re already building British nuclear, with 3600 British businesses and 22,000 people making it happen, including over 800 apprentices. The fastest way to get more nuclear in Britain is get on with the next two units at Sizewell C. It’s a copy of Hinkley Point C, the design is approved and ready to go, and British manufacturers are experts in how to build it. Building more of the same design is the best way to bring down costs and develop a strong UK supply chain.”

“At last, industry has a clear framework on which to focus investment and accelerate implementation. As we have seen with the current energy crisis, boosting the UK’s energy independence is vital for protecting our economy from future market shocks. It is therefore encouraging to see support for a mix of clean energy solutions in today’s much-anticipated energy security strategy.

“Scaling up offshore wind, which is relatively quick to get up and running, is welcome news and will play an important role in boosting renewable supply in the short term. The aim to double low carbon hydrogen production capacity by 2030 using excess offshore wind power is also a positive move. One of hydrogen’s most appealing qualities is its ability to act as a store for electricity production, which would fill gaps in renewable energy supply. Boosting its production is a significant signpost from government that it recognises the long-term value of green hydrogen.

“Importantly, today’s energy measures should be coupled with a commitment to tackle energy efficiency. Improving energy efficiency across the UK’s building stock also has a critical role in delivering energy security and reaching net zero.

“The focus now must be on delivery and we cannot afford to lose momentum. Government will need to build confidence, establishing the right financial and operational climate to enable industry to step up and deliver.”

“Today’s energy strategy may be the successor to 2020’s 10-point plan but now COP26 is in the rear-view mirror, the war in Ukraine is impacting the cost, security and resilience of our energy supply.  So the government has presented an ‘everything’ plan with all energy options back on the table.

“The balancing act for the Treasury is to provide new funding for essential infrastructure and energy efficiency programmes while delivering assistance to low-income households squeezed by rising energy prices.  Just as households are closely looking at costs, so should our industry – and at where the funding will really come from.  Initiatives like new nuclear require huge investment that is only possible if there is sufficient commitment, clarity and certainty on the forward programme stretching way beyond single election cycles.

“The challenge with an ‘everything’ plan is working out where to start – and critically how the funding and phasing will be organised for the pipeline of major projects that are being promised.  Now we have the strategy, government and business must create an integrated, cross-industry programmatic approach with the right controls and oversight in place to deliver net zero infrastructure and investment in clean energy technology at pace and scale.”

“The energy security strategy completely misses the mark in tackling energy consumption in our homes. After the disappointment of the heat and buildings strategy this was an opportunity for government to implement a national retrofit strategy, focusing on improving the energy efficiency of the UK’s draughty and leaky homes. While the strategy does deliver 0% VAT on energy efficiency improvements to properties, a welcome move that the FMB has long been campaigning for, this only helps those with the money to pay in the first place. A broader, insulation led, retrofit strategy would have been an immediate solution to reduce energy consumption, boost the economy and importantly, help save homeowners money on their bills during a cost-of-living crises.”