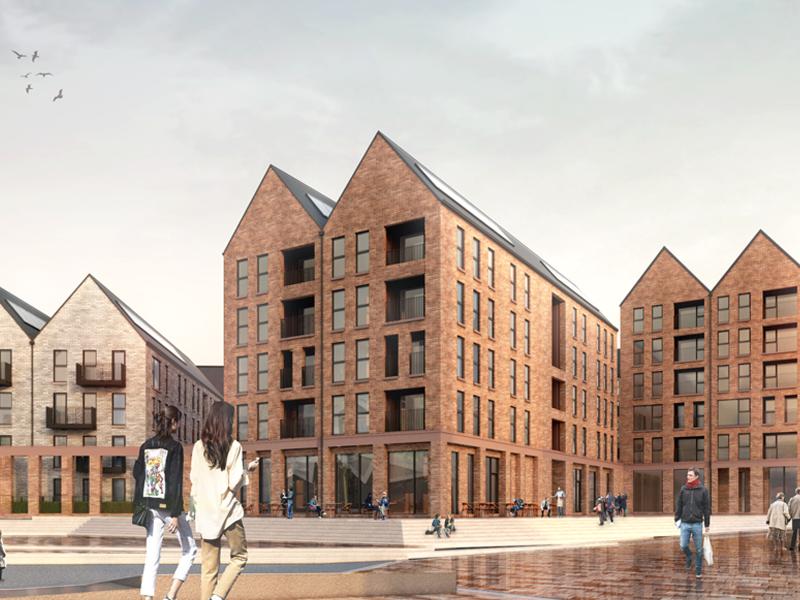 The boost from the Glasgow City Region City Dealcompletes funding for first phase of the Water Row masterplan and means that the contract can now be awarded. The funding package for the redevelopment of Water Row – on the banks of the Clyde in Central Govan – was secured after a Glasgow City Council committee gave its approval.

The Water Row project is designed to play a role in both the regeneration of Govan and the waterfront, with the connecting Govan-Partick Bridge soon to start on site. A masterplan for Water Row – approved by Glasgow City Council in 2019 – outlines a mixed-use scheme providing 200 new homes and 3,500 square metres of commercial space when complete, all set within public space.

The first phase of the project will see the creation of 92 mid-market rented homes and six ground-floor commercial units. An initial package of enabling works funded through Clyde Mission is now complete.

The main contract works for the first phase have been tendered by Govan Housing Association resulting in total project costs of £24,682,765. Despite assembling a funding package of more than £23m from various sources, a funding gap of just over £1.6m needed to be addressed before a contract can be awarded.

Water Row has been identified as an investment priority for the Glasgow City Region City Deal and the delivery of the masterplan is regarded as critical to the regeneration of Central Govan, which occupies a strategically important location at the centre of the emerging Glasgow Riverside Innovation District. The decision by the council secures funding for the first phase of the masterplan.

This City Deal funding of £1,618,314 will contribute towards the costs of external works including public realm and the construction of commercial floorspace. Govan Housing Association is now in a position to award a contract allowing construction to start shortly.