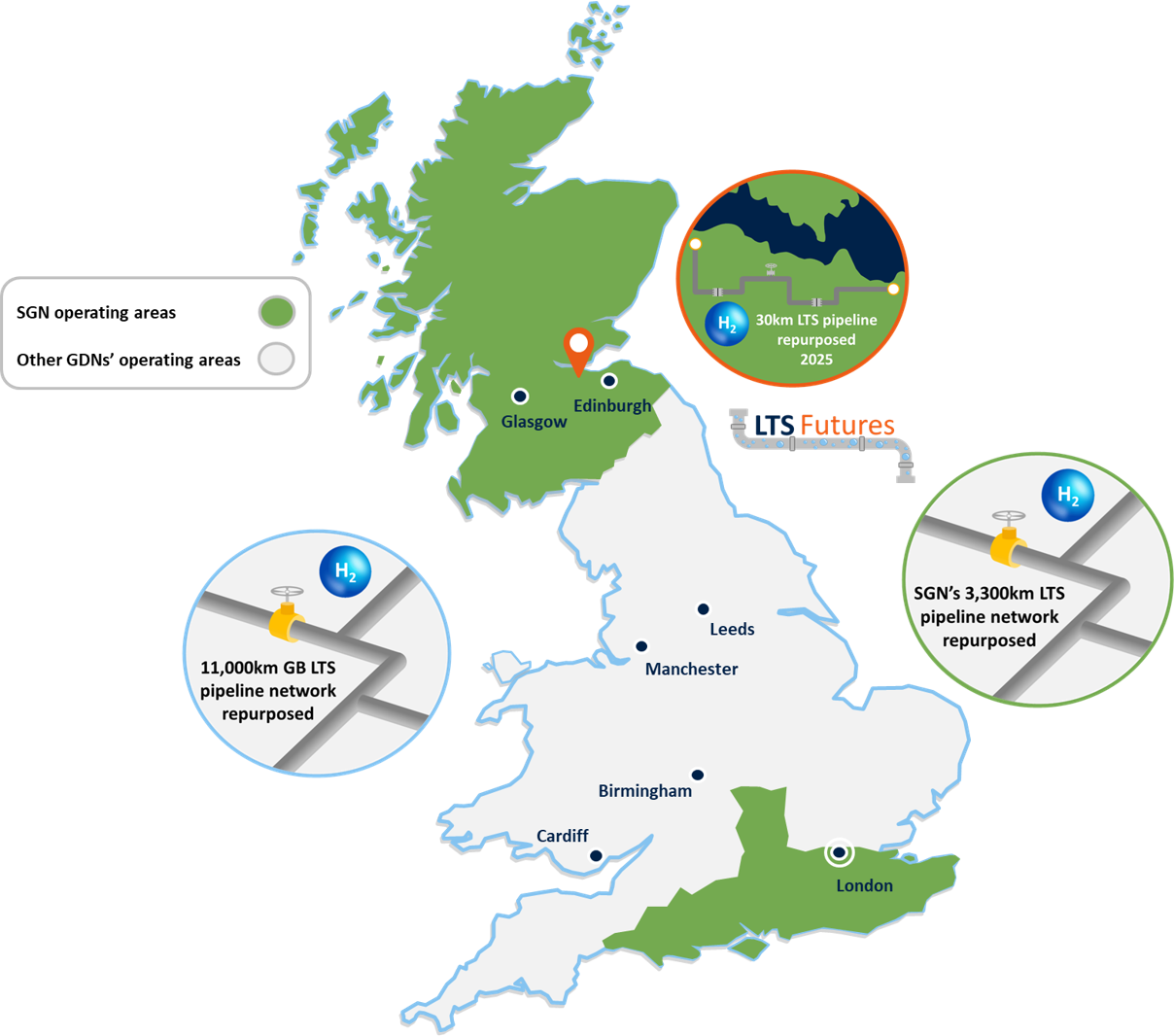 The funding from the energy regulator Ofgem and gas distribution companies will help determine whether Great Britain’s transmission networks can be repurposed for hydrogen gas. The project will be based in Grangemouth, Scotland, and delivered in partnership with global chemical company, Ineos, which has extensive manufacturing and infrastructure facilities in the region.

The local transmission system (LTS) is the critical infrastructure connecting towns and cities to the National Transmission System. Gas distribution networks manage around 11,000km of these high-pressure pipelines, which were originally designed to transport and store natural gas. The LTS takes gas from the national transmission system at a reduced pressure, so that it can be transported directly to industry. It also feeds into gas distribution networks, after further reductions in pressure, to be used in homes and by businesses. An important function of the LTS is to store gas when demand is low, giving a resilient supply of gas covering peak times in the day and periods of cold weather.

Part of the National Hydrogen Programme is to ‘define the role of the LTS in system transformation and facilitating industrial clusters’. With Scotland and the UK targeting net zero by 2045 and 2050 respectively, SGN is preparing the gas network for greener alternatives like hydrogen.

SGN director of energy futures Gus Mcintosh said: “Our local transmission system is part of the national critical infrastructure that reaches millions of homes and businesses across the UK. So, repurposing it for hydrogen could support a hydrogen system transformation that is least cost and least disruptive to customers.

“The LTS provides an essential storage buffer that ensures variations in demand across all sectors, throughout the day and throughout the year, can be supplied resiliently.”

Hydrogen gas behaves slightly differently from natural gas, so it is important to assess its impact. A decommissioned pipeline in Grangemouth has been selected to test and evidence whether it can adapt to carry pure hydrogen. Grangemouth is one of Britain’s largest industrial clusters and could be a key location for hydrogen production. The pipeline is statistically representative of the GB LTS, so will provide the blueprint for repurposing all the high-pressure pipelines in Great Britain’s network.

SGN’s project team will research, develop, test and evidence the compatibility with hydrogen of the Grangemouth pipeline in preparation for a first of its kind repurposing trial and demonstration in 2024. Its partner Ineos will supply the hydrogen for the live trial.

Andrew Gardner, chairman Ineos Grangemouth, said: “We believe that Grangemouth is the ideal location in Scotland to create a hub for hydrogen production, use and export. In January we announced the next step in our plans to build a world-scale low-carbon hydrogen plant at Grangemouth as we commit to being Net Zero by 2045. This trial, in partnership with SGN, will play a vital role in helping to make hydrogen networks a reality, delivering cleaner fuels for both homes and businesses alike.”

He added: “This project will provide key evidence to help inform future heat policy decisions and an understanding of the role of the extensive LTS in achieving net zero for Scotland and the UK. It’s part of a national co-ordinated series of hydrogen industry projects and demonstrations under way right now, including our world-first hydrogen for home heating H100 Fife project, which will provide policy-makers with the evidence they need to determine whether to accelerate and roll out hydrogen in the next decade.”