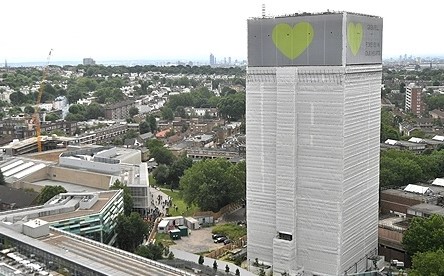 Exactly five years ago today 72 people lost their lives in a London tower block because of a combination of incompetence, cynicism, corruption and greed throughout the construction supply chain.

While the public inquiry continues, the government has already implemented some of the recommendation of its review of fire safety and building regulations. But according to a survey of its members by the Institution of Civil Engineers, not much has really changed.

While only 7% of respondents felt the built environment sector had actually become less safe since the fire at Grenfell, an underwhelming 36% felt it was safer and the same proportion saying it was ‘about the same’.

Respondents were most critical of the industry’s record on ‘updating and enforcing regulations and standards’ with 38% scoring it ‘poor’ or ‘very poor’. A similar proportion (31%) had the same view about ‘sharing lessons and best practice’. They were more positive about ‘ensuring competence of civil engineers and ongoing professional development’ with 40% scoring performance in this area as either ‘excellent’ or ‘good’.

ICE president Ed McCann said: “We owe it to the 72 people who lost their lives at Grenfell to ensure that lessons are learnt. Our survey shows the majority of civil engineers feel the same. Everyone working in the construction industry has a responsibility to make sure a tragedy like Grenfell never happens again and to maintain public confidence in our profession.

“We are working hard to help our members keep their skills and knowledge up to date throughout their careers, and to improve reporting mechanisms. While there is still much work to do, this progress will help ensure that public safety is always the top priority in our industry.”

The survey also found that two in every five respondents (41%) felt that Grenfell had had an impact on their own practice as a civil engineer. Over 78% felt there had been some impact on their learning from areas outside their immediate discipline. More than 75% also reported that it had affected their awareness and prioritisation of public safety and of professional regulations and standards.”