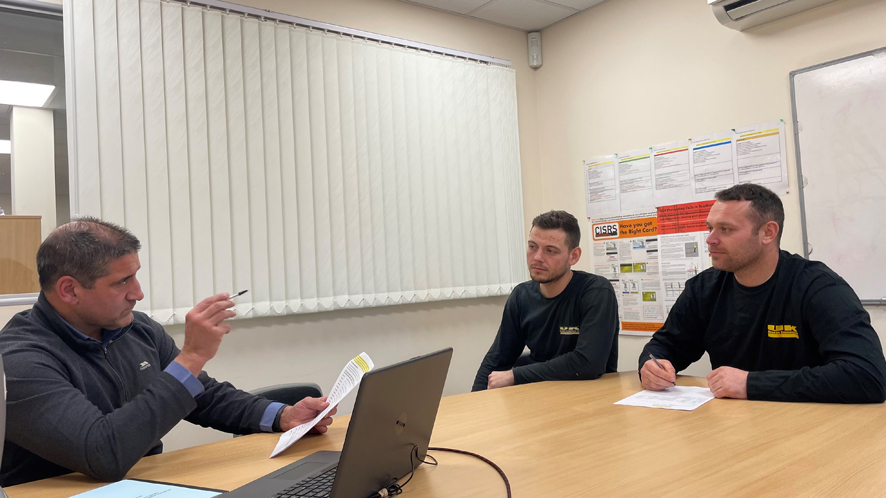 In an industry that is all about working at height, safety training is crucial for scaffolding contractors. But teaching people the correct techniques and best-practice is one thing; it’s quite another to teach them to think differently.

This was the puzzle faced by Jim Cottrell, managing director of West Midlands-based scaffolding firm UK Access Solutions, following an incident on a job for contractor Wates last year.

“We had this incident in which a bricklayer stepped on an unsecured short board on our scaffold and fell through to the next level,” explains Cottrell.

“It was a case of lack of attention to detail,” he adds. It was also the last straw for Cottrell. “We kept having niggling little accidents which I knew could end up with a major incident eventually. The trouble is, once the ‘home-bell’ rings all training goes out the window. People switch off and they’re not mentally at work any more,” he says.

That was the problem and although it is not unique to one company, Cottrell knew he had to think afresh in order to change the culture in his own business.

After discussing the issue with his colleagues at Wates, Cottrell started to form the idea of a series of interactive training modules that would force participants to confront the potential consequences of poor health & safety behaviour.

“I got the idea from Wates’ own ‘Plan right, start right’ initiative and an old SGB video entitled The Cost of Accidents,” says Cottrell. That video, from more than 10 years ago, is a dramatic re-enactment of a hypothetical site accident involving a distracted scaffolder. Hard-hitting and cleverly written, the video remains a popular training resource to this day.

Cottrell’s idea, though, was not a training video, but a real-life role-play in which trainees find themselves in the dock – being cross-examined about an incident caused by their failure to follow safe procedures. The idea is to make trainees understand that they must answer for their failures, as well as get them to focus on correct procedures.

UK Access Solutions has tried similar ideas before: “In early 2020 we got a team to erect a mock scaffold in our yard. We showed them what we wanted, and over 80% knew perfectly well how to do it correctly.

“Then we pulled up the results of our site audit and asked them: ‘then why didn’t you do it correctly on this site? Or this one?’,” he says. “The thing is it’s not enough for most people to act correctly. The best performer can’t drag everybody else up, but the worst will always drag the rest down,” adds Cottrell.

Cottrell’s desire to bring about culture-change at UK Access Solutions has not come out of the blue. His latest initiative follows the company’s decision to transfer ownership of the business to its employees via an ‘employee ownership trust’.

Conceived as a tax-efficient exit strategy for shareholders (one of whom at UK Access Solutions was Cottrell) employee-ownership was introduced by the coalition government in 2015 and is becoming increasingly popular among medium-sized construction businesses.

There are several potential benefits for a business that chooses this route, one of which is the opportunity to focus employees (as part-owners) on working for the success of the business as a shared endeavour. But, as Cottrell observes, getting people to change their mindset is easier said than done:

“They all have a stake in the business and we’re really trying to engage them on that,” he says. “Sixty or 70% think ‘yes, I’ll stay because I own part of this’, but others don’t seem to realise and they’ll jump ship to another employer if they think they’ll earn a bit more. It’s immensely frustrating; I don’t think they realise what it means to be part-owner of a business.”

The new health and safety training concept is part of Cottrell’s plan to engage his site staff in a way that will drive home the responsibilities, as well as the benefits, of part ownership.

The idea only began to form in November last year but by January Cottrell had drafted the content of the ‘mock trial’ training module and was ready to roll it out in early February.

“Our intention is to bring home the gravity of their actions should something go wrong. We are aiming this primarily at our foremen on site. We want them to realise that as fully-trained scaffolders there are serious consequences to their actions if they have left scaffolds in an unsafe condition due to their negligence,” says Cottrell.

“I think it will take a few goes to get this polished and presentable, I also think we may well have to use ‘actors’, as it were, so we get the ‘wrong’ right answers, if you see what I mean, and get the full benefit out of the session.

“We need to take a negative and turn this into a positive. Coupled with the right-first-time internal training programme we hope to gain greater involvement and understanding from the workforce so they can start to benefit fully from belonging to an employee-owned trust.”

This article was first published in the March 2022 issue of The Construction Index Magazine. Sign up online