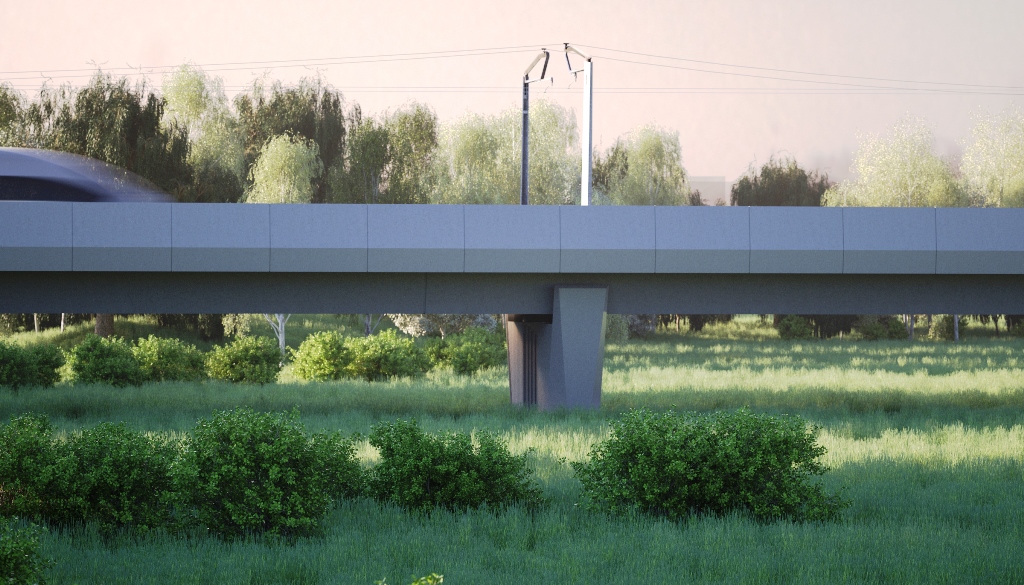 The 880-metre long structure will be made from prefabricated concrete segments that will simply slot together.

Not even the piers will be cast in situ.

The viaduct will cross the flood plain of the River Thame (a tributary of the Thames), just outside Aylesbury, carrying high-speed HS2 trains.

Set low into the landscape, the underside of the viaduct will be just three metres above the ground, with 36 spans, each 25-metres long.

The 35 concrete piers that support the viaduct will also be entirely made off site before being placed on their foundations, meaning that every major element of the structure will be prefabricated.

Traditionally, viaduct beams are secured together above each of the piers with a concrete diaphragm which is cast in situ. The larger pre-cast beams that will be used at Thame Valley can be secured directly to one another, removing the need for the diaphragm. Expected benefits of this include improved durability and reliability, saved time, cost savings and improved safety by reducing the need for people to work at height.

Thame Valley is one of 15 viaducts to be built by EKFB – a contracting consortium of Eiffage, Kier, Ferrovial Construction and Bam Nuttall – working with design partner ASC (a joint venture between Arcadis Setec and Cowi) and specialist architect Moxon.

Recent high speed rail projects in Spain informed the design of this viaduct, HS2 Ltd said. Two wide ‘box girder’ beams will be used for each span, instead of eight smaller beams, to simplify and speed up assembly.

HS2 Ltd head of civil structures Tomas Garcia said: “Prefabrication and off site manufacturing offer huge benefits in terms of efficiency and this design will help us deliver a more efficient, durable and elegant structure with less concrete and steel.”

The lighter-weight structure is expected to save 19,000 tonnes of embedded carbon in comparison to the previous design.  It also reduces lorry movements and disruption to local residents.

EKFB technical director Janice McKenna said: “The structurally efficient solution means we minimise the embedded carbon in the viaduct materials; and we have also been able to reduce emissions during construction by maximising off-site pre-fabrication to achieve an efficient build, as well as reducing the number of HGVs on local roads.”

Preparatory works have already begun on site near Aylesbury, with the design team also looking at whether a similar modular approach to construction can be applied to other, smaller viaducts elsewhere on the route.