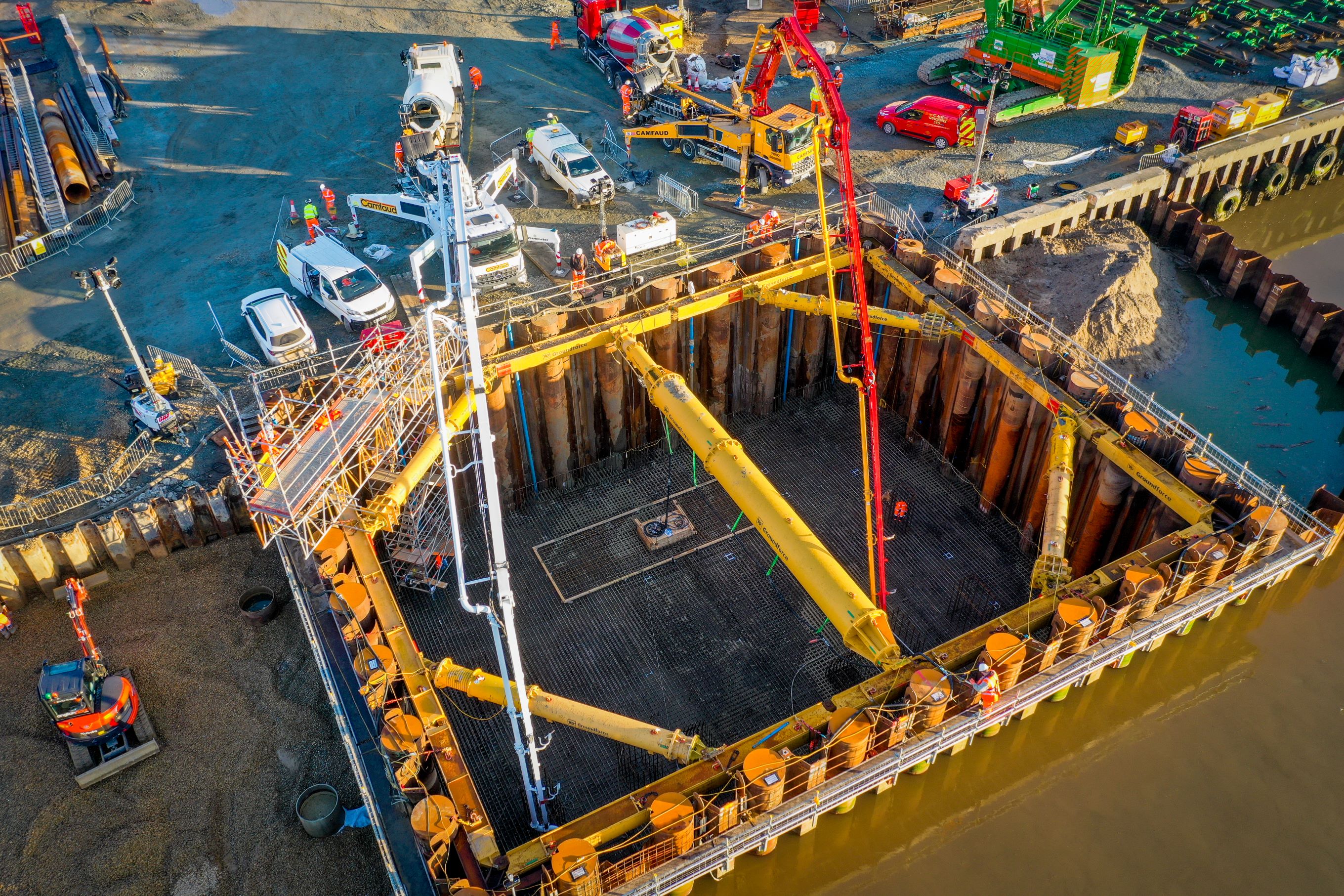 BAM Farrans Joint Venture (JV) is building the £121m Great Yarmouth Third River Crossing to provide a link from the A47 at Harfrey’s roundabout on the west bank of the river to the port and the enterprise zone via South Denes Road on the eastern bank.

The new structure will be a twin leaf bascule bridge – the two halves of the bridge deck will swing up to give clearance to river traffic. The bridge mechanism will be housed within two deep bascule pits, one on either side of the river, which are currently under construction.

The excavations each measure approximately 19 metres x 24 metres across and 10 metres deep. They are surrounded by tidal water on three sides, which, coupled with poor ground conditions, means that substantial structural support is required around the perimeter of both excavations.

The pits have been dug within cofferdams comprising a combination of interlocking steel sheet piles and tubular steel driven piles. Propping equipment, supplied by Groundforce, is installed around the top of the cofferdams to support the high lateral loads. As these loads exceed 400kN/m, props from the heavier end of the Groundforce range were required.

A high-capacity waling beam comprising a Super Mega Brace frame was installed around the top of each excavation and high-capacity MP 375 and MP 250 props (375kN and 250kN respectively) are used to brace the frame.

Four MP 375s are installed as knee-braces in each excavation, one spanning each corner of each rectangular frame. A central MP 250 prop spans each excavation at the mid-point along its length to provide added stability. Groundforce’s own load-monitoring system is fitted to one of the MP 250 props. This measures and records actual loads in real time. The system is calibrated with load limits and configured to trigger an automatic alert if the limit is approached or exceeded. So far, the loadings have remained well within the design parameters, Groundforce reports.

To ensure maximum stiffness, the MP 250s are fitted with ‘super-tube’ extensions which, at 1,220mm, are twice the diameter of the standard tubes.

Despite the depth, the excavations need only be propped at the top of the cofferdam. Groundforce major project manager Thomas Hughes explained: “The tubular steel piles provide a lot of strength and they’re very deep – in excess of 30 metres in length – so there’s plenty of toe-in.”

BAM Farrans started construction work in January 2021 and the first Groundforce components arrived on site in August as excavation within the two cofferdams got under way. The equipment was installed in two phases: first the west-bank cofferdam was braced, followed a few days later by the east-bank cofferdam.

Kevin Percival, sub-agent for BAM Farrans JV, says that the Groundforce solution had saved time and improved site safety on this project. “This is a design-build contract and our designers produced drawings that assumed the use of fabricated steelwork to support the cofferdams. I didn’t specify the Groundforce equipment, but I’ve worked with it before and it’s much quicker than fabricated steel. With steelwork there would have been a lot of welding to do on-site. This is much quicker and doesn’t require welders to work inside the cofferdam,” he explains.

Another factor influencing the decision to specify a modular system was site access. “Access is difficult because most of the excavation is in the river. It’s much easier to install modular components in these conditions,” he added.

Both excavations were completed and the base slab for both bascule pits were cast just before Christmas 2021. BAM Farrans is now casting the side walls of the pits.

Concrete for the first side-wall (in the western cofferdam) was poured in early January. “We’re aiming to cast a wall per week,” Kevin Percival said. “As there are six walls in total, they should all be done by March. Then the supports can come out,” he adds.