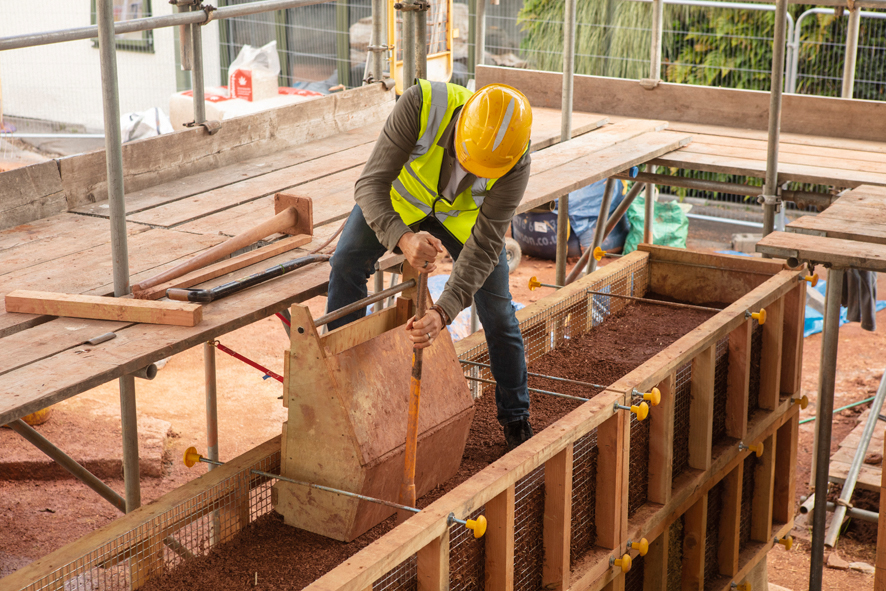 The quest to find new low-carbon, energy-efficient construction methods involves a lot of academic and industrial research. And most of the solutions that have emerged so far seem to revolve around new technologies collectively referred to as ‘modern methods of construction’, or MMCs.

But at Plymouth University a research project is currently under way that takes the opposite approach. Instead of looking for cutting-edge technologies to meet the climate challenge, the university’s Sustainable Earth Institute is exploring the planet-saving potential of possibly the most basic building method of all: cob.

Cob is just a mixture of mud and straw, mashed together and piled up in layers to create the walls of a building. It is a technique that has been used all over the world since ancient times. Here in the UK, it is mostly found in the west country, where there is plenty of heavy clay subsoil.

There are thousands of cob houses still standing in England and many of the occupants don’t even know they are living in humble mud houses. But despite the longevity of traditional cob houses nobody, except for a few self-build enthusiasts, builds with cob today.

There are several reasons for this but the biggest obstacle to the use of cob in new homes now is thermal performance. Cob simply isn’t warm enough to meet the requirements of today’s building regulations.

This is a shame, believes Steve Goodhew, professor of environmental building at Plymouth University. He points out that cob is an extremely cheap, sustainable building material. It is not fired, like brick; it is locally produced – often from the construction site itself – and requires virtually no transport. And it is very easy to use, requiring little in the way of plant and equipment.

Goodhew and his colleagues at Plymouth have just completed construction of an experimental cob building on the university campus. The latest phase of an Anglo-French research project, called CobBauge, the building is the practical application of extensive laboratory work already undertaken to develop a cob building that is fit for the 21st century.

The building itself is small, comprising a single storey, one-room structure with a footprint of just 30m2. It will be used for meetings, seminars and other departmental activities, but its primary role is as a test-bed. Sensors embedded in the cob walls will monitor humidity, temperature and movement, while other factors such as acoustic performance, air quality and air-tightness will also be monitored.

“Cob has many benefits,” says Goodhew. “It is ultra-low carbon, it’s warm in winter and it’s cool in summer. But we don’t use it because traditional cob doesn’t meet the requirements of the current building regulations.”

Goodhew’s colleague Dr Matthew Fox, architect and lecturer at the university’s School of Art, Design & Architecture, explains that with a density of around 1,700kg/m3, a cob wall would need to be about two metres thick to meet the current thermal requirements of the building regulations.

“We’ve measured U-values and the best you can get is about 0.9W/m2K with a 600mm-thick cob wall. You need to get below 0.3 to meet the regulations,” he explains.

To many people, the answer might seem obvious: apply a layer of modern high-performance insulation to either the inside or the outside of the wall. But that won’t work, says Fox.

“Yes you could slap a layer of PPS insulation over the wall, but that would do you no good. It’s a closed cell foam; it has no vapour permeability,” he explains. “Cob is hygroscopic. If you stick plastic insulation over it you’re going to have big problems.”

And this is a problem that many people living in cob houses today have discovered to their cost. Tarting up an old cob cottage with a hard cement render finished with a polyurethane-based masonry paint might look nice to start with. But moisture build-up in the wall will create damp problems indoors, the cob will swell, the render will crack and then even more water will get in.

The traditional – and still the best – finish for a cob wall is a lime render, preferably a non-hydraulic mix with the flexibility to accommodate some movement without cracking or spalling.

Porosity and the ability to allow water vapour to escape is essential. Cob works well as a building material if it is kept reasonably dry. It will survive normal fluctuations in ambient moisture levels as long as it is kept clear of the ground – for example on a stone plinth – and water isn’t allowed to penetrate from the top. But it must be allowed to breathe.

Straw – an essential component of cob – is a good insulator but, says Fox, there just isn’t enough straw in a traditional cob mix to provide any thermal resistance.

The building at Plymouth is constructed using an innovative composite mix developed by the CobBauge project. This comprises two layers that may be described as an inner leaf and an outer leaf, though there is no cavity separating them.

“The inner leaf is a 300mm layer of traditional cob – that is soil mixed with 2.5% fibre by weight,” says Fox. This is essentially a structural element and contributes most of the load-bearing ability. The team experimented with a variety of natural fibres, including hemp straw and flax, but settled eventually for barley straw – which happens to be the traditional choice.

The outer leaf is where the structure departs radically from tradition. This is a far more lightweight material and is essentially non-structural. It is still cob – but it’s thermal cob. It comprises a 300mm thick layer made by combining clay slip with 50% fibre by weight. The fibre employed here is not barley but hemp ‘shiv’ – the chopped up woody core of hemp stems.

“It needs to be mixed very thoroughly so that the slip completely coats the surface of the fibres,” says Fox. Then, just like the traditional cob, the thermal cob is applied in layers and tamped down to compact it.

Traditional cob building is an extremely simple process. The mud and straw are mixed together with water and literally trampled to get a thorough mix of the right consistency. On small jobs, this might be done by humans in welly boots; on larger jobs, by repeatedly driving a tractor over the stuff. In days gone by, horses or cattle could do the job – and the inevitable dung improved the mixture’s workability.

The mix is then shovelled onto a stone plinth sitting on simple footings and applied in lifts, or layers, about 500mm deep. Each lift is allowed to dry slightly and stiffen before the next is applied. The developing wall is kept vertical with plumb lines and after every few lifts, the sides are trimmed and flattened with a spade or paring iron.

The CobBauge building, however, is a rather more refined construction. Instead of the freestyle layering of traditional cob, these walls were formed within shuttering consisting of 3mm galvanised wire mesh stapled to a timber studwork frame. Without this support, the outer layer of thermal cob would probably have slumped away from the inner leaf.

Both inner and outer layers were formed simultaneously with the result that they are firmly bound together. Strength tests have shown that when the two layers are forced apart, they seldom fracture along the boundary. The building is finished with a lime render on the outside and a clay plaster applied to the interior walls. The roof is zinc with timber supports and a light earth insulating mix to stop cold bridging.

Other departures from tradition include the use of concrete blocks for the foundations and plinth and a concrete floor slab on a layer of foam glass insulation. Goodhew says that future buildings would ideally use less carbon-intensive materials for these elements.

The contract to build the experimental structure was awarded to local builder Chris Noakes, who readily admits that he had no prior experience of building with earth. This is no impediment to the project, however, which aims to prove that cob building does not demand special skills or years of experience.

Nevertheless, Noakes took the wise precaution of employing a subcontractor, Dartington-based Paul Barclay, who had previously built his own cob house.

Although not even Barclay had used this method of cob building before, the construction team quickly got the hang of mixing and placing the material. After the first 600mm lift, the cob was placed in 250mm-deep lifts, working around the entire perimeter rather than building walls up in sections.

Progress was slow to start with but quickly accelerated as the team got into their stride. “The biggest technical issue has been ensuring the formwork remains plumb as you build up,” says Noakes, “but time is probably going to be the main objection for most builders.”

There is no denying that building with cob can be a slow process – particularly when compared with some of the off-site ‘modern methods of construction’ now available. Each lift needs to dry partially before the next can be cast on and weather, especially in the southwest, can slow this process right down. To help speed things up, the CobBauge building was constructed underneath a temporary roof supported over the scaffold.

“It is slower than other methods, but this is not a vast impediment if you plan the work carefully,” says Goodhew. “And it was good to see Chris and his team refine their technique and really make good progress,” he adds.

Time constraints aside, cob has unique benefits, insists Goodhew. It is a simple, natural material with an extremely small carbon footprint, it is easy to work with and it is durable.

Best of all, it is locally abundant and really cheap. “Cob is made from subsoil. Nobody wants subsoil; they just dump it,” he says. “I went to a local site recently where a housing developer is building 45 new homes. They had 10,000 tonnes of subsoil just piled up in berms.

“It takes about 100 tonnes of subsoil to build one cob house; they’re building 45 homes on this site and they’ve got enough free raw material there to build twice that number,” adds Goodhew.

If the CobBauge project succeeds, cob will once again become a desirable choice for low-cost, low-carbon homes that are sympathetic to their local environment. The new building at Plymouth University is an important step towards this goal and is already generating a lot of interest, says Matthew Fox.

“Interest has just exploded, worldwide,” he says. “We’ve got colleagues in Australia and the US that want to use our data as well as others here in the UK. This is the first cob building ever to meet UK building regulations.”