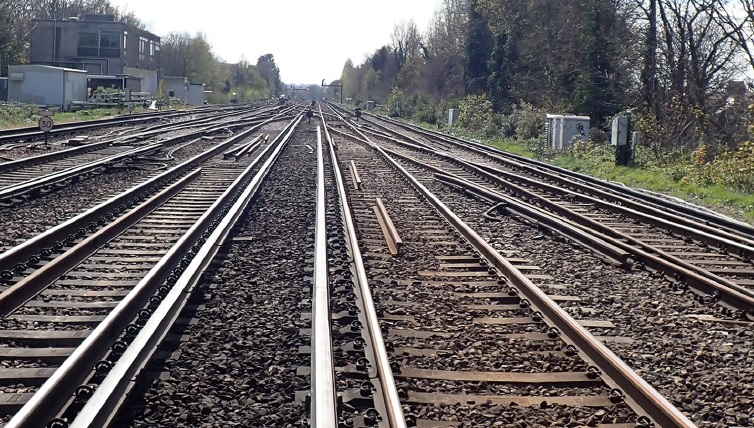 The official report into the death of 30-year-old Tyler Byrne near Surbiton station last year found similarities to the deaths of two track workers in south Wales two years before.

At around 11:35am on Tuesday 9th February 2021, a passenger train travelling at 76 mph struck and killed track worker Tyler Byrne as he was walking in a crossover line between two through lines near Surbiton station, southwest London. He was one of four track workers involved in undertaking inspections at the location.

The accident happened because the victim, who was the controller of site safety (COSS), was unaware of his position relative to the train. The report says that he was unaware of his position probably because he had become distracted, either due to teaching an assistant or by undertaking an actual inspection. Once distracted, it is likely his deviation towards the line on which the train was travelling was exacerbated by the layout of the rails at the junction. The train driver sounded the train’s warning horn twice but neither of the other two people working with the COSS recalled hearing it.

Tyler Byrne was a permanent employee of Network Rail, having been recruited in 2015. As well as being certified as competent in personal track safety, he was certified as competent to perform various safety-critical roles including controller of site safety (COSS). He qualified as a COSS in November 2016. He was familiar with both the work and the location, as he had completed the Surbiton patrol on many previous occasions.

RAIB’s investigation found that the inspection was planned to be completed while trains were running with a safe system of work in place that used unassisted lookouts. This was the least safe type of system of work which could be implemented when working on track, but its ongoing use had not been challenged in the years before the accident.

It further found that Network Rail had a programme in place to eliminate unassisted lookout working but this had not yet led to changes to the safe systems of work at the depot where the controller of site safety worked.  Safety of people working on or near railway lines relies on the controller of site safety implementing and managing a safe system of work, however where they are also responsible for carrying out the work, they are at increased risk of becoming distracted, the report said.  This can, and has, led to staff being struck by trains or being involved in near misses.

RAIB has made three recommendations. Two recommendations are addressed to Network Rail. The first of these relates to maintaining members of work groups working on or near the line within designated safe limits, when some or all lines remain open to traffic. The second recommendation relates to understanding the nature and reasons behind rule and behavioural non-compliances observed by RAIB during its investigation. A recommendation has also been made to Rail Delivery Group to work with the wider rail industry to improve the judgement of train drivers on whether track workers are in a dangerous position and to reinforce the use of the train horn to deliver urgent warnings.

Andrew Hall, chief inspector of rail accidents, said: “After a period of almost five years with no fatalities involving moving trains, track maintenance staff have died in accidents each year from 2018 to 2021.

“In 2019, two track workers were killed near Margam in south Wales, and our investigation found unsafe working practices that had not been detected by Network Rail’s management assurance arrangements.

“At Surbiton, the accident happened probably because a patroller, who was carrying out inspections and was also responsible for the group’s safe system of work, had become distracted and lost awareness of his position relative to the line the train approached on. The patrol was being undertaken with protection provided by unassisted lookouts. Although this was the usual practice for these inspections working with unassisted lookouts is the least safe type of system allowed for when working on track and this had not been challenged in the years leading up to the accident.

“We found evidence that people at the depot involved were aware of the Margam accident, but they were convinced that their circumstances were different and that the earlier lessons did not apply to them. Consequently, managers at the depot did not learn from the experience of Margam and continued to allow much work to be carried out under unassisted lookout protection.

“While Network Rail has made great strides in reducing the amount of track maintenance work undertaken when trains are running, it remains the case that many of the recommendations that we made in the Margam report are relevant to the accident at Surbiton. I urge everyone involved with track maintenance to look closely at what happened here, and learn from it, so that deaths at work on the line really do become a thing of the past.”

The full 55-page report is available at www.gov.uk/raib-reports