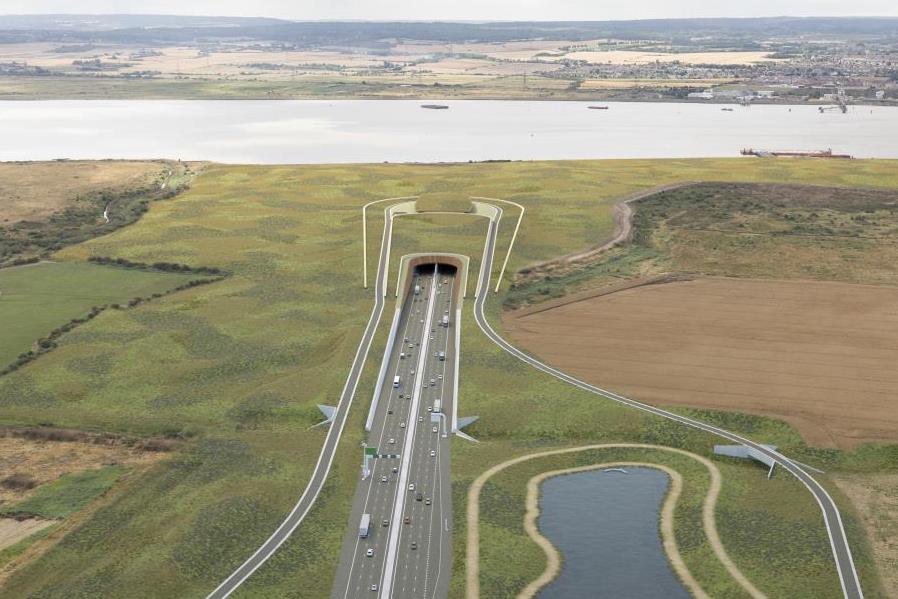 The Lower Thames Crossing has been designated a ‘pathfinder’ project to explore carbon neutral construction.

National Highways wants it to be “the greenest road ever built in the UK”.

The Lower Thames Crossing project comprises a tunnel under the River Thames to the east of Tilbury and Gravesend along with 14.3 miles of new motorway connecting the M2/A2, A13 and M25. At 2.6 miles, the twin-bore tunnel would be the longest road tunnel in the UK.

It has been struggling to get planning permission. Highways England, as it then was,  submitted an application to the Planning Inspectorate for a development consent order in October 2020 but had to withdraw it after being told it had inadequate information. It has yet to resubmit it, so the start of construction is still several years away – 2024 at the earliest.

As a carbon neutral pathfinder project, the Lower Thames Crossing will be used as a testbed for building and maintaining infrastructure with as little environmental impact as possible. Ideas being considered include: removing diesel from sites by mandating the use of only hydrogen or electric powered plant; and using alternatives to – or carbon-light versions of – concrete and steel. After actual carbon reduction measures have been exhausted (stopping short of not actually building it), National Highways will consider carbon offsetting to address residual emissions, it said.

According to National Highways, this makes the Lower Thames Crossing “the first major infrastructure project in the UK to put carbon reduction at the heart of its procurement”.

The project’s procurement process will move to the next stage next month as the shortlisted bidders for the two  road building packages will be invited to tender. The procurement for the £2.3bn tunnels and approaches contract moves  later in the year.

Shortlisted bidders for the road build packages are:

US consulting engineer Jacobs has a £162.5m contract to oversee construction.

Thames Crossing Action Group, campaigning against the project, said last year: “It is worth noting that the proposed LTC would destroy woodland (including ancient woodland) along the route from Kent through Thurrock and up into Havering and Essex. Thames Chase Community Forest, which is actually a community woodland created in response to the M25 when that was constructed, and now that is under threat from the proposed LTC.  Or The Wilderness in South Ockendon, a beautiful and ancient woodland that dates back hundreds of years, that would be destroyed by the proposed LTC. Again hardly gives the impression of [National Highways] caring about woodland and nature does it?”