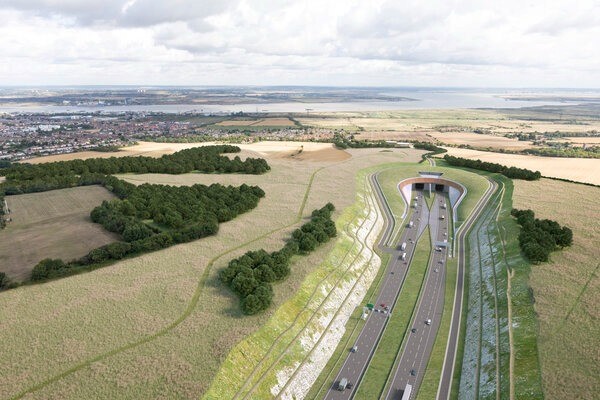 The official invitation to participate in dialogue (or ITPD) is the next stage in the procurement of contractors to build the UK’s longest road tunnel .

In April 2021 Highways England (as it then was) shortlisted three bidders for the £2.3bn tunnels package:

The tunnel is part of a wider £8bn project that includes 23km of new link roads connecting to the motorway networks of Kent to the south and Essex to the north of the River Thames, east of London.

The tunnel contract is for a twin bored tunnel and its immediate approach roads. At a length of 4.3km it will be the longest UK road tunnel and with a diameter of over 16m diameter, the widest tunnel in Europe.

National Highways said that it was adopting a competitive dialogue approach rather than just getting bidders to submit tenders because of the complexity of the project – “with unique challenges that require innovative solutions”.

It is also hoping to make it a carbon neutral construction project.

First up, however, it stills needs to get planning permission, which in the face of forceful local opposition is not straightforward and cannot be taken for granted.

National Highways plans to submit a new application for a development consent order later this year. An initial application was submitted to the Planning Inspectorate in October 2020 but thrown out for lacking the required level of detail.

National Highways hopes that a development consent order might be secured in time for contracts to be signed next summer (2023).

It is not clear how much National Highways will the score the presence of a British contractor (Murphy) and British design firms (Mott McDonald and Arup) in the favour of BMJV for the contract. All the other companies in the shortlisted bidders have foreign ownership. Now that the UK is no longer in the European Union, the government is no longer bound by EU public procurement law and can favour domestic bidders over foreign-owned ones, it it sees value in that approach for a nationally significant infrastructure project.