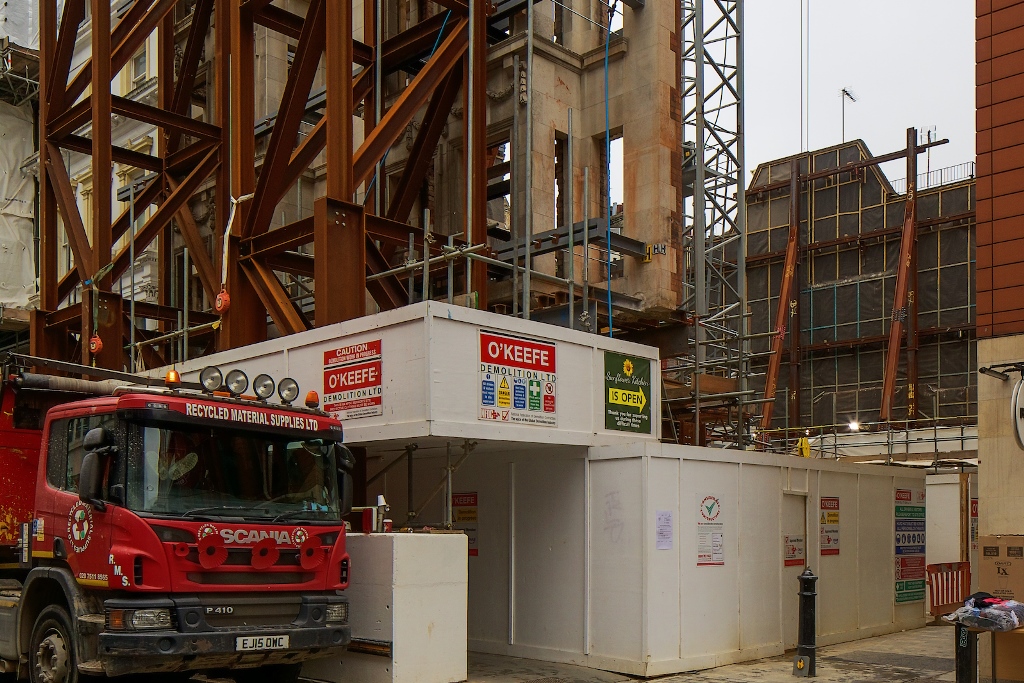 O’Keefe has a contract for the demolition, façade retention and basement construction at 13-14 Hanover Street in Mayfair for Frank Capital. It has now demolished nearly the entire structure, leaving only the original façade supported temporarily on a bespoke structural steel frame.

The project spans from Hanover Street and includes 6-7 Pollen Street, a narrow thoroughfare running perpendicular to Hanover Street. This presents  challenges in managing pedestrian and vehicular traffic, including buses, around the site.

Installation of 100 tonnes of temporary façade supports to the Hanover Street elevation and the surrounding party walls enabled the wholesale demolition of the six-storey structure behind the façade.

Behind the retained façade, O’Keefe has excavated a 10-metre two-storey basement and is now in the process of constructing the in-situ concrete retaining walls and basement slabs.

The project will ultimately deliver new Class A1 commercial premises comprising five floors of office space with retail space on the ground floor.

Besides the technical challenge of retaining the building’s original façade, O’Keefe has the additional challenge of demolishing a building with three party walls. Noise, vibration and dust all need to be minimised.

“It’s a very delicate job,” said project manager Kevin Hartigan. “All the neighbouring buildings are fully occupied and one of them is a Michelin-starred restaurant. We have site monitoring equipment set up to take readings all the time. We have a surveyor come in every week and we get a weekly report. I also send a weekly report off to our client, plus we have a monthly meeting with the local authority environmental people.”

Due to the extra basement level, O’Keefe has had to underpin to a depth of up to seven metres along all of the party walls. The retaining wall along Pollen Street was originally specified as a steel sheet-piled structure but O’Keefe modified the design to use contiguous bored concrete piles.

“The original design would have interfered with a mains electric supply running along Pollen Street. The cables would have had to be lifted and moved temporarily to the other side of the street,” Kevin Hartigan explained. “Our solution was to install contiguous piles in front of the existing retaining wall, which got us round the problem.”

O’Keefe designed and installed all the temporary supporting steelwork for the façade. It was fabricated by Mareth Fabrications, based in Slough.

O’Keefe completed the lower basement slab pour in mid-February and installed the reinforced concrete basement walls. Once the upper basement (B1) and ground floor slabs are cast, construction of the new building, behind the original façade, can begin.