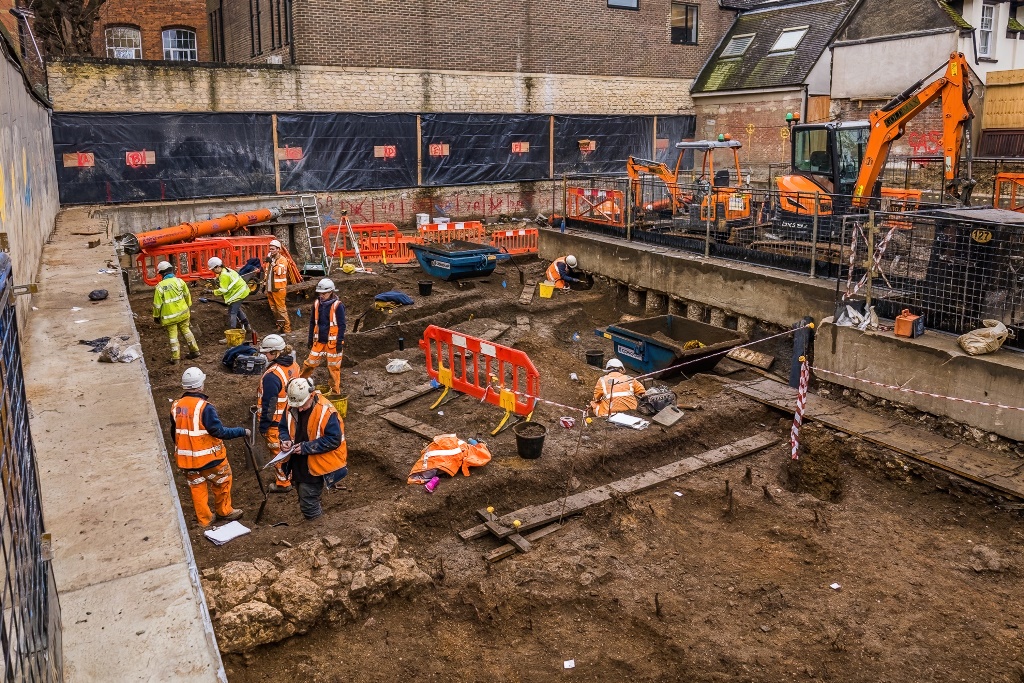 Building contractor Beard is cooperating with archaeologists on the site of a student accommodation scheme under construction in Brasenose College’s Frewin Annexe.

Beard is developing 30 student flats on the site of the former St Marys College, which has been described as the ‘lost Augustinian college’ because of its relative obscurity – it only existed for 106 years and that was in the Tudor days.

The only remaining part of St Mary’s College that is still visible is a rubble wall at the lower part of the gateway to the Frewin site from New Inn Hall Street, which is believed to have been part of the western boundary of the college.

It was founded in 1435 but delays hampered construction until Cardinal Wolsey intervened in the 1520s. After this, work proceeded quickly, but the building was then disbanded and then quickly fell into a state of disrepair as a result of Henry VIII’s dissolution of the monasteries by between 1536 and 1541.

So far, a team from Oxford Archaeology has found part of the Wolsey phase of construction in the form of a massive limestone wall foundation, which is believed to have supported the wall to a significant stone building and is likely to belong to one of the buildings that formed St Marys College, possibly the south range of the cloister.

Near to the wall foundations, excavation is under way on a series of pits that are rich in artefacts including butchered animal bones and charcoal indicating the disposal of waste from food preparation, possibly from the kitchens to St Mary’s College which were probably nearby. Other artefacts unearthed include a complete 17th century stone flagon, and a bone comb, long cross silver penny and decorated floor tiles from the medieval period.

Oxford Archaeology senior project manager Ben Ford said: “We are excited that the construction of the new building gives us the opportunity, and that Brasenose College have given us the funding, to archaeologically excavate the remains of this unique and fascinating part of Oxford. We are hoping to shed light not only on the layout of the ‘lost college’ of St Mary’s, but also discover evidence that tells us about the lives of some of medieval Oxford’s most powerful Norman families who probably lived at the site.

“Frewin Hall has a stone vaulted basement which dates from Norman times and is one of the oldest buildings still in use in Oxford. If we are really lucky, we may uncover signs of even older everyday life, from Oxford’s earliest years when it was first built as a heavily-defended town on the Thames, guarding the border between Saxon and the Viking held lands.”

Beard project manager Peter Beilby said: “Working alongside the archaeologists in this constrained site within Oxford’s historic centre is a difficult but interesting exercise. The team from Beard are drawing upon their extensive experience from many previous Oxford College projects with similar challenges to deliver successful outcomes for everyone involved.”

Archaeologists will be working at the site for another month, ahead of development of the student flats for Brasenose College.