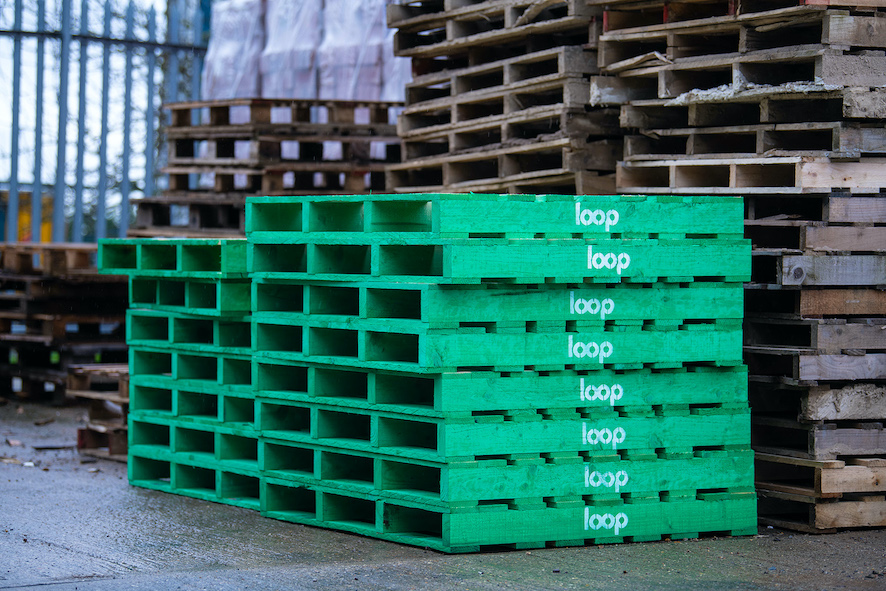 Marshalls, Sisk, Countryside, Tobermore and the Wolseley Group are among the latest organisations to sign up to the Pallet Loop, a scheme to reduce the consumption of single-use pallets and switch the sector to reusing them.

Every year an estimated 18 million pallets are manufactured for the UK construction industry, with most being binned after being used just once. Estimates suggest that up to 10% of the construction waste stream is currently made up of pallets.

The Pallet Loop is a joint venture between Paul and Ryan Lewis and Scott Group – one of the UK’s leading pallet producers. The Lewis brothers used to own HLC Wood Products, which they sold to Scott in 2015.

We reported in November 2021 how the Pallet Loop had been set up with the ambition of transforming the distribution of building materials nationwide. Distinctively branded green pallets are distributed to manufacturers, who transport products on them to construction sites after paying a deposit per pallet. As pallets move through the supply chain, the deposit passes from manufacturer to merchant to end user. After being stacked and stored, The Pallet Loop collects them (reducing site clutter) and returns deposits. It then repairs them as necessary and recirculates them.

More have since come on board, including paving block producer Marshalls, whose sustainability improvement director, John Davies, said: “As well as focusing on achieving net zero by 2030, we’re always looking at ways to reduce our waste and recycle [and reuse] more, and a circular approach to our pallet use is something we’re very interested in exploring.”

Contractor John Sisk & Son is another convert. Sustainability manager Sarah-Jane Davies said: “The Pallet Loop supports our strategic objective to successfully embed circular economy principles into our operations by 2023, as part of our 2030 Sustainability Roadmap. At Sisk we fully endorse this circular economy model to encourage the reuse of pallets in the construction sector, moving away from the single use discard routine which has previously been adopted.”

Builders’ merchant Wolseley is another. Nick Coad, head of ESG, said: “Wolseley is working on circular economy projects with some of our key suppliers. Pallet Loop complements this by addressing the packaging element as we look to remove avoidable pallet waste.”

The Pallet Loop chief executive Phil Dent said: “With sustainability now top of the agenda for most companies across the construction industry, the launch of The Pallet Loop is incredibly timely – and we’ve been having some very productive conversations. The last year has seen a tangible shift in the way we all think about the environment. Businesses and consumers now recognise what needs to be done to get climate change under control – and realise that it can’t happen in isolation. That theme leaps out from the conversations we’ve been having.

“As with safety, there is a common consensus that we can’t compete on sustainability and that the solution lies in working together to drive change. It’s an exciting time for the team at The Pallet Loop and I’d like to thank everyone that’s stepped forward to embrace the idea of a circular economy pallet solution. As we move towards the roll out of our green pallets later this year, we look forward to continuing our work with all of our signatories, wider industry stakeholders and trade associations.”