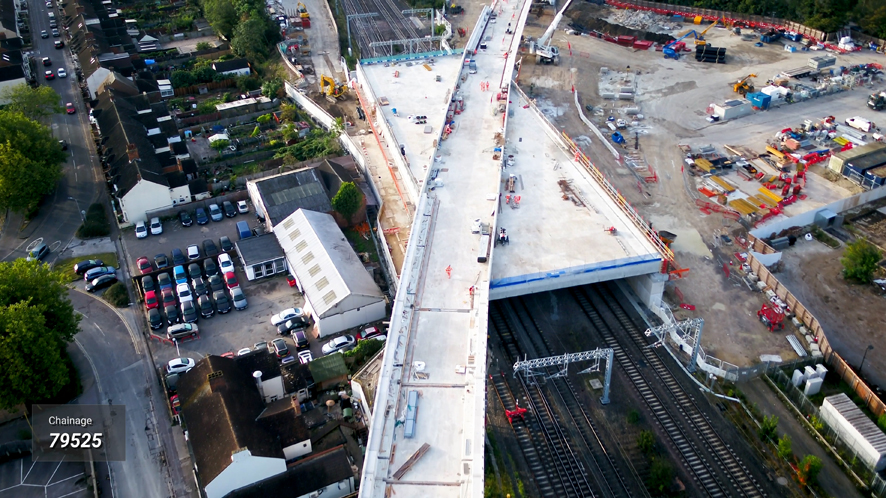 The East West Rail Alliance, the consortium building the strategic railway linking East Anglia with central and south-west England, claims to have saved around £70m by changing the design of a crucial railway flyover.

The new Bletchley flyover replaces an existing structure erected in the early 1960s to carry the old Oxford to Cambridge railway over the West Coast mainline. The old flyover has had to be replaced with a new structure designed to modern standards.

This article was first published in the January 2022 issue of The Construction Index Magazine.  Sign up online

Work started on the project in 2019 with removal of the lineside equipment and overhead electric lines. Dismantling of the original flyover started in May last year with the removal of 14 of the structure’s 37 spans.

Engineers on the project saw a way of saving time and money by avoiding the need to support the new flyover on columns in the conventional manner. Replacing the old flyover with a similar design would have involved closing the West Coast main line below to allow five supporting columns to be built in between the tracks.

Instead, the Bletchley flyover is supported by a prefabricated concrete box built on top of the West Coast main line. It is designed to last 120 years with minimal future maintenance required.

The structure comprises side walls built up from large-format precast concrete units – like huge bricks – with the roof supported on a series of long-span prestressed concrete beams.

In effect, the new structure forms a rectangular railway tunnel with the precast concrete roof providing a platform for the new flyover to sit on. In the coming months track will start to be laid over the new flyover structure.

Adopting this design not only avoids the lengthy closure needed to install supporting columns. It also means the West Coast main line does not have to be closed during the flyover replacement taking place above, as the box structure provides a physical protective barrier.

East West Rail Alliance project director Mark Cuzner says: “By working smarter we’ve been able to speed up the project by around six months. At the start of the project, we built a protective wall next to the West Coast main line so we could safely build the box structure during the day, when the railway is open, instead of working piecemeal at night-time when the railway is closed.

“Most of the components for both the box structure and the flyover arrived pre-built and were simply assembled on site, like a model kit or set of Duplo bricks,” adds Cuzner. “The simplicity of construction meant we could safely reduce the workforce on site by 60%, cut the previously-forecast cost by £70m and get the job done six months quicker than planned.”

The flyover support structure is made from 138 concrete shell abutments and 101 prestressed concrete beams (each weighing 40 tonnes) manufactured and supplied by Nottinghamshire-based ABM Precast.

A line possession over the early May bank-holiday this year enabled the lifting work to take place and the power cables to be replaced beneath the new flyover.

ABM started production of the beams in early 2021 and by the end of April all 101 beams were on site alongside the tracks ready for installation over the weekend possession of the main line.

AMB also supplied 41 cill beams, each weighing up to 28 tonnes, to cap the concrete shell abutments and support the 101 prestressed beams, some of which are over 30m long.

To further minimise the amount of work carried out on site, the end beams for the roof slab were supplied with a secondary cast-on detail which will acts as permanent formwork for the deck pour.

ABM also supplied its proprietary Diaphragm Formwork System (DFS) pre-fitted to the prestressed beams to allow the subsequent in-situ concrete works to be carried out without the need for temporary formwork at high levels adjacent to the live railway.

The DFS system provides vertical permanent formwork to close the front face of the diaphragm between the prestressed beams.

ABM is also contracted to supply prestressed beams, cill beams and precast “conarch” structures for seven other bridge structures on the line towards Oxford.

This article was first published in the January 2022 issue of The Construction Index Magazine.  Sign up online