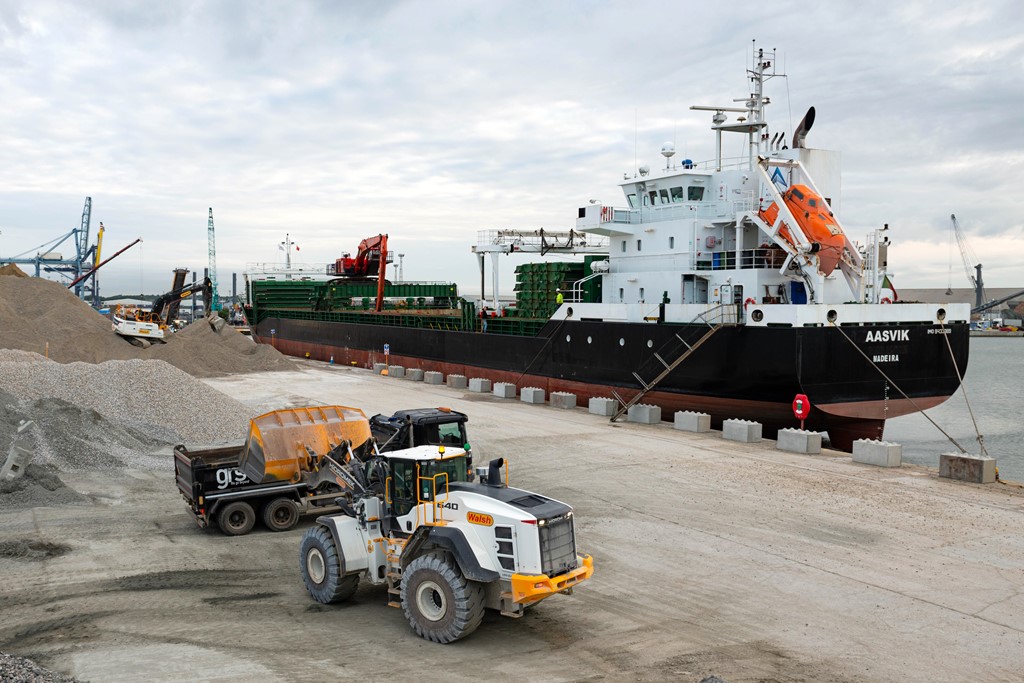 The delivery marks the start of a deal that enables GRS to import more than half a million tonnes of secondary granite – branded Enviroc – from Cornwall into London each year by ship.

The key sales pitch is that, because it is a by-product of other processes, it has just a fraction of the embodied carbon of other construction aggregates.

London developers looking to build greener can specify the GRS material, available in bulk or bags, for almost every construction application from sub-base and capping layers to structural concrete and asphalt, and even decorative landscaping, the supplier says.

Cornish granite has previously been used in a handful of London developments, including the Olympic Park. But its widespread use has been constrained by the view that transporting it to London was not viable.

Now, GRS has invested £4m in a Molson CDE aggregates processing plant at the Port of Tilbury.

For centuries, the production of china clay (kaolin) has shaped the Cornish countryside. For every tonne of china clay extracted, around nine tonnes of granite by-product is generated – this has built up into enormous waste piles estimated to be around 500 million tonnes. These are now the source for Enviroc aggregates. The new venture sees GRS’s Cornish subsidiary Maen Karne haul the raw material from a china clay pit near St Austell to nearby Fowey harbour where it is loaded onto ships to make the 400 nautical mile trip to Tilbury for processing. From Tilbury, material can be delivered across the capital by road, rail or – with GRS’s wholly-owned Thames freight business Walsh Marine – by river.

GRS Trading managing director Antony Beamish said: “This major investment allows us to turn an industrial by-product into a high-quality construction aggregate, Enviroc. By also transporting this material by water we can achieve unparalleled environmental performance – an independent study suggests the carbon footprint is on average 47% lower than the equivalent primary aggregates. That makes Enviroc arguably the UK’s most sustainable aggregate. Using it in combination with low-carbon cement, for example, could produce the lowest carbon concrete achievable.”

He said: “We anticipate that Enviroc will change the way materials are specified on major construction jobs. Contractors can count on a consistent, quality product that meets specification and at the same time know that it’s the most sustainable aggregate there is – a UK-sourced, industrial by-product transported by water. It doesn’t get better than that.”

London consumes about 10 million tonnes of construction aggregates a year. With recycling of demolition and excavation waste virtually at its maximum in the capital, GRS believes the way to further improve the sustainability of aggregates is to use secondaries and transport them as efficiently as possible. Last year GRS announced an exclusive deal to bring to market millions of tonnes of granite aggregate arising from a British tungsten mine that has reopened in Devon.

Besides the new marine wharf and processing plant at Tilbury, GRS is recommissioning a rail freight terminal to be able to transport secondary aggregates more widely across Greater London and the southeast.