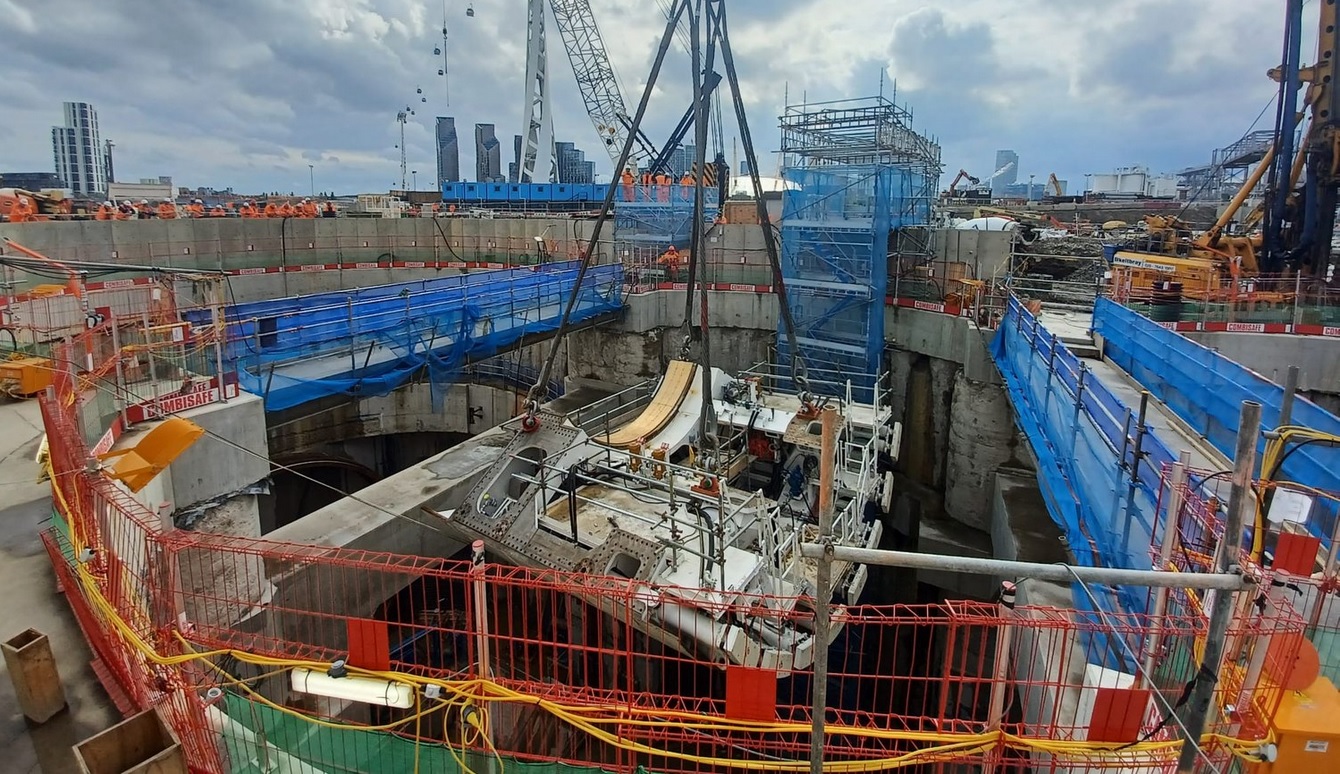 The first element to be lowered down was part of the TBM shield, followed by the 250-tonne main drive of the TBM.

Using a 600-tonne Liebherr crawler crane with a super lift – supplied by Weldex – a four-point lifting and set down operation was undertaken. Each lift takes approximately two hours to achieve and around 20 lifting operations will be required to lower all the components into the launch chamber.

The Silvertown Tunnel will be a new 1.4km twin-lane road tunnel under the River Thames, linking North Greenwich and Silvertown. It will be the first new road crossing east of Tower Bridge since the Dartford Crossing was built more than 30 years ago.

The Herrenknecht TBM for the Silvertown Tunnel Project is the largest diameter tunnel boring machine to be used in the UK, at 11.91 metres. By comparison, TBMs used on Crossrail were 7.1 metres and Thames Tideway project 8.85 metres.

Throughout the next month, the Silvertown tunnelling team will continue to lift parts into the launch chamber before final sign-off and start of tunnelling later this summer.

The TBM has been named Jill in honour of Jill Viner, who in June 1974 was London’s first female bus driver.

TfL awarded Riverlinx Special Purpose Vehicle (SPV) the contract for financing and overseeing the design, build and maintenance of the Silvertown Tunnel in 2019. The Riverlinx Construction Joint Venture (CJV), comprising Bam Nuttall, Ferrovial Construction and SK Ecoplant, is undertaking the design and construction.

Riverlinx CJV project director Juan Angel Martinez said: “There has been a lot of hard work involved to get us to this point, and the achievements so far are a great example of what collaboration and excellent teamwork can deliver.”

Transport for London head of delivery for the project, Helen Wright, said: “The start of final assembly of the TBM within the launch chamber is a major milestone for the Silvertown Tunnel project as we prepare for the start of tunnelling later this year. I’m delighted that we will be naming the TBM after Jill Viner – a fitting name given how the tunnel will radically improve bus access across the river at this location.”

Riverlinx CJV is expected to complete construction of the Silvertown Tunnel in Spring 2025.