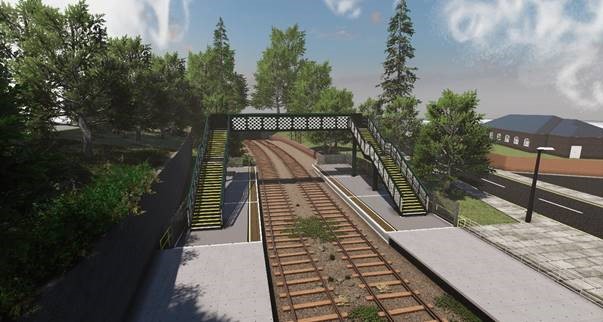 There is a growing demand for level crossings to be replaced across the UK rail network due to the risks they pose to the public. Taziker has responded with its own design solution.

In 2018 Network Rail organised a design competition with the Royal Institute of British Architects (RIBA) for footbridges. Three designs were selected – the Frame bridge (designed by Gottlieb Paludin Architects/Davies Maguire) as the winner, and the Beacon (Haskoll/Davies Maguire) and the Ribbon (Knight/Arup) as back-ups. All three were put in the design manual for station footbridges published in December 2020.

Other designs have since emerged, with financial backing from Network Rail – the Futura (Marks Barfield/Cowi) and the Flow (Knight/Jacobs and others).

Taziker’s design has been self-funded but despite the lack of any development funding from Network Rail, it has now secured commissions in three separate locations.

It is using its Legacy FRP bridge designs for a three-metre wide bridleway footbridge in Llanharan, South Wales, as well as a new ‘access for all’ (AFA) footbridge in Lostwithiel in Cornwall and a new level crossing replacement footbridge in Shornemead, Kent.

The Shornemead contract has been awarded through competitive tender, and Taziker is just starting the site survey and ground investigation works.

Lostwithiel and Llanharan are at similar stages, PACE 2 (Grip 4 & 5 Design – according to the Governance for Railway Investment Projects procedures). Actually delivery remains a few months away.

Taziker technical services director Matt Greenhalgh believes that his solution “brings something different to the network”.

He explains: “The Legacy FRP footbridge is a cost-effective, maintenance-free, FRP solution that can be quickly and efficiently installed in remote or difficult to access areas. We have achieved this by bringing together proven innovative technologies, thereby providing a new market for the production and installation of safe access across the railway to replace existing dangerous level-crossings.

“Due to the compact design, the footbridge can fit onto existing foundations as well as bringing space-saving benefits when limited land is available.”

Fibre-reinforced polymer has emerged as a popular material for footbridges because they need less maintenance than steel and simpler foundations than concrete. Being plastics, they are also lighter, so need smaller crane to install.

A key difference is that unlike other FRP bridges that have emerged, the Legacy Bridge uses pultruded structural sections rather than mouldings.

Greenhalgh explains the benefit of this, as he sees it: “The use of pultruded structural sections, whilst increasing the materials required to satisfy the structural requirements, eliminates the need for multiple moulds, and allows the design to be modified easily, whilst still maintaining a modular construction that allows for mass fabrication.”

He says that the use of pultruded sections allows construction of several bridges to be carried out at the same time, and production is not limited to the number of moulds available. “By standardising parts within the construction of our three Legacy Bridge designs, we can mass produce parts for multiple projects thus realising efficiencies and saving costs,” he says.

“The current cost for Network Rail to install an ‘access for all’ footbridge with lifts at a small station with two tracks and two platforms ranges between £4m and £5m. The Legacy AFA footbridge solution has reduced that cost to below £2.5m.

“We genuinely feel that the success of the Legacy bridge innovation will demonstrate how composites can be a real and viable option over steel and concrete structures.”

He says: “Our FRP footbridge will demonstrate a low carbon approach for materials used during construction and installation – helping to create a greener railway and planet.”