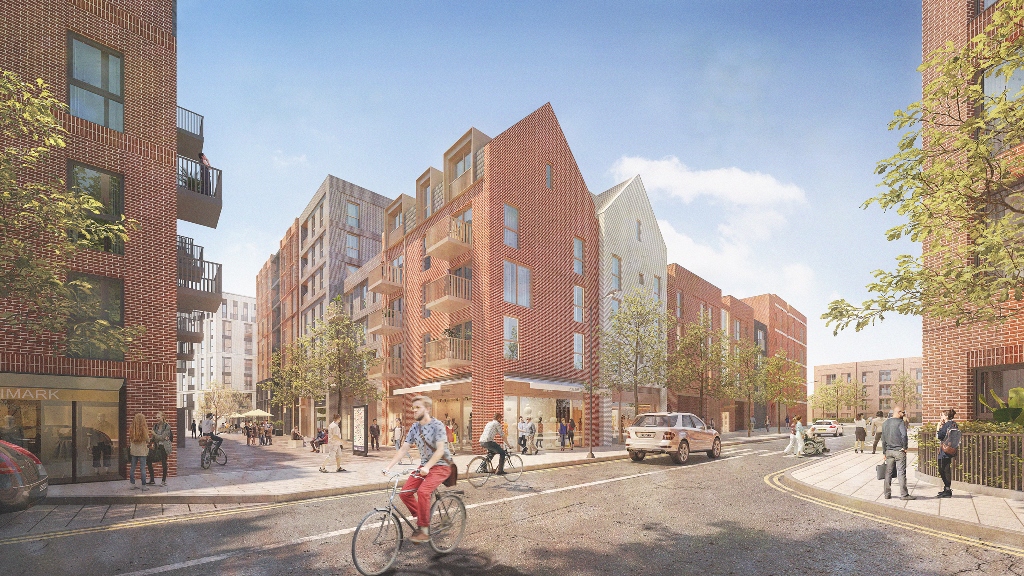 Weston Homes’ new proposals to replace the 1960s-built Anglia Square shopping centre are for a lower rise development up to eight storeys height instead of the 20-storey tower previously proposed.

The new proposals for the 4.65 hectare Anglia Square will provide for up to 1,100 homes of mixed tenure and up to 80,369 sq ft of retail, commercial and leisure premises including a community hub and up to 450 car parking spaces.

The overall floorspace of the proposed development has been cut from 1.9 million sq ft down to 1.23 million sq ft; the amount of retail and commercial space has been reduced from 428,465 sq ft down to 80,369 sq ft. There has also been a reduction in the car parking provision, in line with Norwich City Council policy.

These changes have allowed for a significant overall reduction in the size, height and massing of the scheme. The previous plans, conceived in 2018, proposed a smaller number of much larger buildings rising from 5 to 12 storeys, including a 20 storey landmark tower.

Norwich City Council planning committee voted in favour of the proposed scheme back in 2018 and resolved to grant planning permission. The proposals were then called in by the secretary of state. A public inquiry was held, resulting in the planning inspector recommending that planning permission should be granted. But incumbent communities secretary Robert Jenrick was swayed by opponents to the scheme, including Historic England, and decided to refuse permission. He said that demolishing the 1960s-built Anglia Square shopping centre and replacing it with a 20-storey block of flats, a hotel, cinema and new shops “did not protect and enhance the heritage assets of the city”.

In the new scheme the tower is gone and the large blocks have been broken up in favour of a collection of smaller, lower rise buildings with contrasting red, white and flint grey brick or stone effect facades. Features will include canilevered and ornamental balconies, with brick detailing and design details to the upper floors such as lintels and sills, and undulating roofspaces characterised by gables, pitched roofs and dormer windows.

Bob Weston, chairman & managing director of Weston Homes, said: “With the new proposals for Anglia Square we have consulted in depth with local people and listened to all the key stakeholders. After many months of hard work on the designs we hope that the new application will be well received by the planning committee and local people of Norwich. Weston Homes remains firmly committed to finding a viable future for Anglia Square which has the support of the people of Norwich.”